The assembly budget committee voted to release the budget late Thursday, setting the stage for a vote by the full legislature on Monday.

The committee released the budget by a vote of 5 to 4, with Democratic Assemblyman Albert Coutinho (D-Newark) the lone Democrat to vote “aye.”

“I will not characterize this as a positive budget by any stretch of the imagination,” said Coutinho, who called the budget the worst he had ever seen. “But today I am going to extend my hand in bi-partisanship so we can move this budget forward. The reality is shutting down government is not an answer.”

“I want to be clear – Democrats do not support this Republican budget replete with tax increases on working class New Jerseyans,” said Cryan. “We did what we could to make it better, but most of it remains an assault on the middle-class, senior citizens, disabled and the poor. …Knowing we’ve done all we could against Republican resistance, and also knowing that shutting down state government would be disastrous for our state, we provided enough votes to release budget bills from committee. Those votes do not signify support.”

The committee vote was marked by impassioned speeches from members both in favor and against the $29.4 billion plan that has been the subject of months of wrangling on both sides of the aisle.

In voting yes, several Republicans touted the budget as a victory for the state in a time of economic hardship.

“For the first time in a long time we are choosing to live within our means,” said Assemblyman Jay Webber, (R-Morris Plains).  “(This budget) does what the people of New Jersey asked us to do – cut spending and not raise taxes.”

Despite the release by the committee the vote in the Assembly is still up in the air as Republicans Alison McHose (R-Franklin) and Michael Patrick Carroll (R-Morris Twp.) both said they may not be able to support the plan.  That leaves the GOP two votes short.  As part of a deal between made with the governor, the Democratic leadership has agreed to supply eight votes in the assembly to ensure the passage, but leaders have said they will not provide additional votes should any Republicans defect.

Republicans in the senate faced similar difficulties as at least one member waffled.  Senator Michael Doherty (R-Washington Twp.) caused a stall in the budget vote when he balked at passing some of the ancillary budget bills.  Republicans had hoped to substitute another member for Doherty on the budget committee, but as of 7 p.m. had still not worked out a deal. 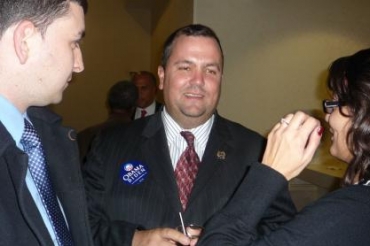