NEWARK – Contrary to city sources over the weekend who speculated that he would only endorse a concept and not the details of Gov. Chris Christie’s proposed hard 2.5% cap on annual property taxes, Mayor Cory Booker stood with the Republican governor today and declared his full support for the governor’s plan.

“I stand here with the governor to achieve a new day,” said Booker in the driveway of a South Ward home with Christie and Lieutenant Gov. Kim Gudagno at his sides. “The governor likes steak and I like tofu. The governor is bold, and I am bald. But we both recognize the city is facing real problems.”

Two days after the leader of his own party, Senate President Steve Sweeney (D-West Deptford), released an alternative plan for a 2.9% property tax cap (a reduction from the state’s current 4 percent cap) that would not require voter approval, Booker emphasized his endorsement not only of the governor’s cap, but of Christie’s proposed “toolkit.”

“Essential is the governor’s toolkit to hold down the growing cost of government,” said the big city Democrat. “We must have both a toolkit and a cap.”

Booker cited arbitration reform as one of the chief components of Christie’s toolkit needed to make the property tax cap work.

“Everyone talks about shared services,” Booker said. “We need the cap to create that urgency. …The cap and the toolkit reforms go a long way.”

Throughout the hour-long press conference on the property of an embattled property taxpayer, Christie and Booker both sounded bipartisan tones, while the governor also seized the opportunity to contrast the Christie/Booker approach with Sweeney’s.

“Two different Trentons,” said Christie, differentiating his own hard cap proposal from Sweeney’s on the point of voter approval, which is required in Christie’s proposal if a given local or county government wants to raise taxes above 2.5%.

“In the old Trenton, politicians believe they are the solutions to every problem.

“What is so hard about this?” Christie asked. “Let the public vote.”

He cited last year’s $400 million open space referendum, which the public approved, arguing that if people can vote on that, they can vote on whether they want to pay more than an annual 2.5% hike on their property taxes.

Booker, too, used the referendum portion of Christie’s plan to distinguish it from Sweeney’s, pointing to polling he and his allies did in 2006 in which the mayor said voters affirmed wanting to pay a percent more in property taxes so the city could make certain key investments.

Booker and Christie both denied that the mayor is supporting the governor’s hard cap and toolkit in exchange for Christie’s backing on the mayor’s plan to create a revenue-generating Municipal Utilities Authority (MUA).

“No,” said Christie. “The mayor and I have a lot of agenda items we’re discussing, including education reform. …I am for anything that works and makes the city more professional and efficient.”

“We do not do transactional politics,” Booker said.

Standing in the driveway  at the edge of the press conference, SEUI union labor Rahaman Muhammad shook his head in further disappointment over the mayor’s endorsement of the governor’s plan. Rahman said he prefers the flexibility in Sweeney’s 2.9% proposal.

Mo Butler, Booker’s chief of staff, emphasized that the mayor was endorsing Christie’s plan “with a caviat,” namely successful passage of the governor’s other toolkit reforms. 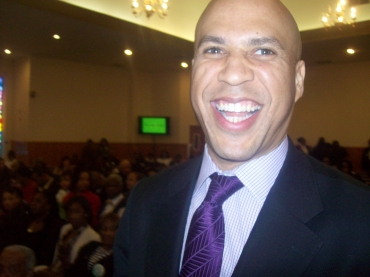