Gov. Chris Christie signaled from the stage in Gibbstown that all was not syncronicity back at the Statehouse when he told his audience, “I have to get up to Trenton to make sure everyone stays in line and stays in their lanes.”

Getting out of South Jersey, the governor got on the phone with party leaders in the Assembly, in particular to try to corral Assemblywoman Alison McHose (R-Franklin) and Assemblyman Michael Patrick Carroll (R-Morris Twp.).

He leaned on Republican Conference Leader Jon Bramnick (R-Westfield), who said when he received the call, “If you see two SUVs parked outside, you’d better have a back door.”

In this case, Bramnick doesn’t need one – potentially – as much as McHose and Carroll.

“This governor has taken more risks in fighting special interests in order to change the direction of the state,” Bramnick told PolitickerNJ.com, when asked about his efforts to convince the lawmaker renegades to support the Christie budget of $29.4 billion.

Failure to land the legislators in Christie’s corner would enable the Democrats to deal-make as a trade for the two additional votes the governor needs to pass the budget on the Assembly side.

“For representatives not to be supportive of someone taking these risks is a major mistake,” Bramnick said to arguments made by McHose and Carroll that Christie is giving too much aid to the cities to the jeopardy of their suburban districts.

Asked what in his budgeting decision-making constituted the biggest risk for Christie, Bramnick acknowledged the core of Carroll’s and McHose’s worry.

“He’s taken 90 percent of state aid from some Republican supportive districts, but the point is he’s targeted everyone,” Bramnick said. 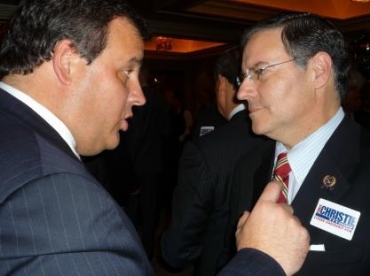