Democrats hobbled by internal strife as they stagger through the motions to grind out a budget vote aren’t the only ones.

If upper house Dems are starting to show increased signs of discomfort in their caucus as old fault lines re-emerge, the Assembly GOP has its own two-pronged issue: the unwillingness of Assemblywoman Alison McHose (R-Franklin) and Assemblyman Michael Patrick Carroll (R-Morris Twp.) to line up with the rest of the party and vote for Gov. Chris Christie’s $29.4 billion budget.

“I have to speak to her and find out what she intends to do,” said Assembly Minority Leader Alex DeCroce (R-Parsippany), when referred to a Star Ledger column by Paul Mulshine today that spells out McHose’s disaffection.

Carroll insists he’s been sending emails and communiques for three months signfying his own opposition, so it’s no newsflash. But DeCroce said McHose’s fall-out lands unexpectantly and inconveniently.

“We need her vote,” he said of the Sussex County lawmaker.

Sources close to Democrats say Assembly Speaker Sheila Oliver (D-East Orange) has eight of her members primed to vote for Christie’s budget as part of the restoration deal leadership struck this week with the GOP governor.

She may have to round up more if Carroll and McHose don’t budge. Carroll said there are plenty who will move at the right price.

“We’re not like Democrats, who have to run on a line. Ask Freddy Caraballo what happens when you try to buck the line,” said the Morris Republican, referring to former Assemblyman Wilfredo Caraballo (D-Newark), who famously ran afoul of the local party boss only to get tossed by the machine in a re-election year.

Republican renegades McHose and Carroll bristled early when the governor announced municipal and school aid cuts that impact their Republican districts disproportionate to urban regions of the state. Then the budget deal reached last night yielded roughly $170 million in restorations to Democratic districts and programs advocated by Dems, compared to $10 million negotiated by Republicans.

DeCroce said he appreciates McHose’s and Carroll’s efforts at ideological purity, but “I think it’s not unusual for governors to compromise to get a budget. If this is what he’s got to do to make room in the budget to accomodate Democratic requests, we’re all supposed to be working together now.”

The leader didn’t touch the fiery Carroll, who has always occupied the caucus’s conservative right flank, but he again reiterated his desire to get McHose in line.

“She’s a good member, but sometimes she listens to people who lead her down the wrong path,” said DeCroce, who’s unconvinced she won’t be standing with the GOP when the clerk opens up the machines on Monday.

McHose, for her part, said those people supposedly leading her astray are her constituents.

“I want to be able to say to the people who elected me that I wanted to make this budget better and take care of my district,” McHose told PolitickerNJ.com. “I want the governor to eliminate free pre-school in Abbott Districts and redistribute that $613 million to the non-Abbott districts and give relief to our towns that were decimated in this initial budget – people who need property tax relief.” McHose said Sparta took a state aid cut that resulted in a ten percent tax increase.

“Meanwhile,” she said, “Hoboken is getting a pretty sweet deal. Their taxes are not impacted like ours. Listen, people have figured it out now. Say what you want about the Tea Party movement, but people are aware and engaged. I was talking to some parents from Sparta, who have formed a new organization. This is the right thing to do for our districts.”

Carroll re-upped his own opposition to the budget fashioned by a governor who resides in Carroll’s legislative district.

The assemblyman thought it absurd that $48 million in budget restorations this week would go toward Urban Enterprise Zones (UEZs).

“What stopped the governor from saying, ‘here’s my budget, vote for it,'” Carroll wanted to know. “Why do we want to cut a deal with the Democrats? There was an opportunity here to make real reform, but it was muffed. This was a time for drawing battle lines. During the campaign, he called pre-school babysitting. So why doesn’t he follow through with that and use $600 million in preschool education and give it to property tax relief in the suburbs?” 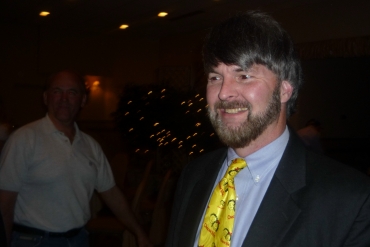