As the contentious budget season draws to a close, Democratic lawmakers in both houses Monday will attempt to override the governor’s recent veto of the so-called “millionaire’s tax.”

The bill, which would increase taxes on income over $1 million per year, was passed in party-line votes by both houses on May 20.  But minutes later, Republican Gov. Chris Christie vetoed the measure as promised, telling reporters “more and more people have left the state and continue to leave the state because of the tax situation.”

Democratic leaders say the tax comes down to simple math: raise taxes on 16,000 residents to help out 600,000.

“Nothing is more important to Democrats than protecting our most vulnerable senior citizens who are struggling to pay their property taxes and keep their homes,” said Assembly Speaker Sheila Y. Oliver (D-East Orange) in a statement. “Unfortunately, Republicans sided with millionaires over senior citizens, but it’s important to give them one more chance to correct their mistake.

But despite Monday’s dramatic display from Democratic leaders, the party likely does not have the votes necessary to override the veto.  The Assembly will vote first and Democrats would need 54 votes – including seven Republicans – to override.  If successful, the Senate would take up the charge, needing four Republicans to join them for the override to succeed.

And while Republicans openly scoffed at the override effort saying it will do little but force Democrats to vote to raise taxes yet again, even some Democrats said the vote was a waste of time.

“There’s nothing to the vote,” said state Sen. Ronald L. Rice (D-Newark). “We don’t have enough votes and the Republicans aren’t going to vote for it, obviously. It’s more show than anything else. It will all get debated, and then it will just die. Then they’ll start working with the governor.”

The one-year tax increase would apply to some 16,000 state residents and according to estimates would raise about $630 million.  Democrats say that money should be used to restore property tax rebates to 600,000 senior citizens and disabled residents.

Democrats are determined to make Republicans own the governor’s budget and the program cuts it contains. The override vote will force GOP lawmakers to support those cuts one more time.  The issue is sure to show up in campaign spots this fall when Republican State Sen. Tom Goodwin (R-Hamilton) takes on Democratic Assemblywoman Linda Greenstein (D-Plainsboro) in a special election for Goodwin’s 14th District seat.  The 14th is heavily populated with state workers, who have been vocal in their criticism of Christie’s spending plan. 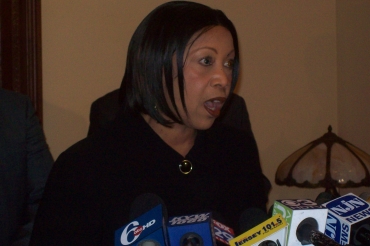