“I still consider Steve Lonegan to be a dear friend of mine, but I’m rather surprised to hear these comments,” said Doherty, who held out against portions of Christie’s $29.4 billion budget until this weekend when he secured concessions.

The governor axed the business filing fee and amended the gift card bill so it does not negatively impact small businesses in exchange for Doherty agreeing to back the budget and attendant bills.

“I am hurt that Steve would consider me a traitor to the cause,” said Doherty, who had just emerged from a caucus session in which the governor met personally with GOP senators.

Doherty lauded Christie for taking leadership not only on the budget but on core conservative values.

“We’ve accomplished basic things like pension reform,” he said. “This governor refused to re-appoint a liberal supreme court justice. This is the only pro life governor in New Jersey history. I stand with my colleagues. Democrats refused to provide leadership on this budget. The cost of not signing onto this was Democrats getting more: the family planning bill, welfare money, etc.”

Doherty said it’s easy to stand on the sideline and criticize.

“I think he’s a very intelligent man who’s accomplished a lot, but I am disappointed,” Doherty said of Lonegan. “I was the only person who supported him and now he’s the first one to attack me.” 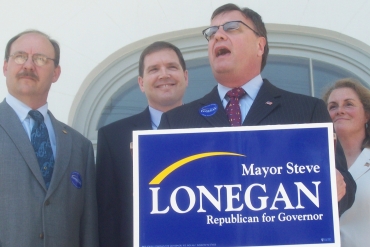