ELIZABETH – Tony Monteiro gets off his cellphone long enough to squeeze in a couple of sentences before he fields his next call.

“How’s the rest of the state looking?” asks the former councilman who’s now on the outside of the local Democratic organization and teamed with Board of Education member Rafael Fajardo.

Monteiro’s already shaking his head before he receives an answer.

“This is the battleground, right here,” he says. “Elizabeth.”

Monteiro and Fajardo back a slate of candidates against Mayor Chris Bollwage’s council incumbents.

There are six ward seats at stake, and the Democratic incumbents aligned with the mayor number five.

Bollwage’s allies maintain that Monteiro and Fajardo’s organization has brazenly poured Board of Education resources into the council race.

An unwilling protagonist in this local battle as Fajardo’s campaign lit portrays him as his local omnipotence, state Sen. Ray Lesniak (D-Elizabeth) says, “This is not about who among their team wins the election. It’s who among them, when this is all sorted out, goes to jail.”

Being on the outside of the party power structure has indeed created strange Election Day alliances for the challengers.

But the attitude among Fajardo’s and Monteiro’s people seems to be this is a street fight in which every strong witted operative – however out of kilter – needs to be on deck.

“How many of you here have ever taken money to work an election?” Fajardo asks the army of campaign allies plugged into the phones in this hardware store turned campaign headquaters, where the smiling faces of each of the ward candidates designates each battle station.

“Never!” is the returned cry.

Back on the street in the Fifth Ward, Eduardo Rodriguez commands the entrance to the school.

“You can check my ELEC report,” he says. “They say I’m in the race just to split the vote and help re-elect (Bollwage ally Councilman William Gallman). It’s not true.”

But Fajardo’s team worries about the chances of Democrats for Change candidate Lester Dominguez with Rodriguez in the race.

That’s not the only problem he encounters as he splits from Monteiro and heads for another polling place and takes a cellphone call.

Poll workers are turning his allies away from the polls with the explanation thatthey are not registered Democrats.

“Go back there and insist,” Fajardo says into the phone. “Insist!”

It’s another piece of turbulence on the trail for the Democrats for Change team, and not their first encounter with the party purity factor.

In the First Ward, where Councilman Manny Grova expects to gut out a re-election victory against Fajardo ally Diego Padilla, Padilla’s Democrats for Change signs feature unwelcome additions: pieces of duct tape with the word “Republican” stuck in full view of voters. 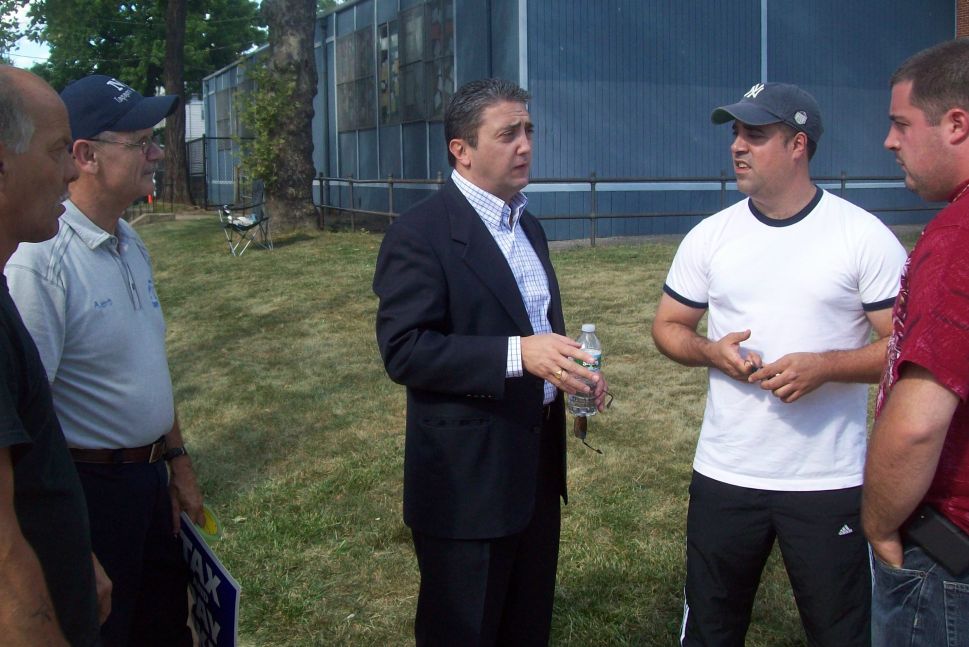