It looked like a bore snore primary in the 3rd District before establishment darling Jon Runyan demonstrated repeated less than stellar fundraising (he has $135k cash on hand) and the Philadelphia Inquirer backed underdog Justin Murphy, a former Tabernacle committeeman.

The back-to-back bad news for Runyan put the race on a few radars.

“I think the 3rd District is going to be interesting,” said Patrick Murray, political scientist and pollster for Monmouth University, “based on the fact that Murphy got the Inquirer endorsement and Runyan’s fundraising numbers, which are somewhat anemic.”

But Burlington County GOP Chairman Bill Layton said people should not get too excited by the prospect of an upset – or even a contest.

“You always like endorsements but do they swing elections? I don’t think so. It’s not the end of the world.”

Layton said Murphy has done his best to rile up the anti-organization crowd in Burlington and Ocean, where the bulk of 3rd District Republican votes are concentrated.

“The Tea Party movement is good and fine, but it’s not enough in a primary where organizations and lines are everything,” Layton said. “I understand the environment. Look, if you’re an incumbent right now, you should be scared. If you’re in elected office, you should be wearing a diaper.”

“Every candidate has liabilities, and we all know Jon’s now,” said Layton, a nod to the former football star’s college arrest for drunk driving and his property’s farmland assessment designation. “But what people should know about Justin Murphy is that this guy raised taxes 75% in three years.”

Murphy could argue that his upstart tenure as a committeman mirrors the troubled one term and out effort of former Morris County Freeholder Chris Christie.

And look what happened to him.

But Layton said Murphy ran afoul of the organization because he was simply an embarrassment on the governing body.

“He was out of control in Tabernacle and would say outlandish, crazy things,” said the party chairman.

His 2000 campaign for committeeman with fellow Republican Janice Webber resulted in party control of the five-member body swinging 3-2 to the Republicans.

“When I campaigned, I said, ‘your property taxes will go up,’ keeping in mind that the municipal side represents just nine percent of taxes,” said the congressional candidate. “You need three votes to do anything, to make it work.

“In budget workshops, I suggested a whole host of things to steer the budget to a zero or near zero rate, and we did we ultimately drive it close to zero by the third budget – to three tenths of a penny, actually. It took us a little longer, but it wouldn’t have if the others went a long with my suggestions. I suggested the town committee not take health benefits, and not take health benefits for spouses and their children. I suggested town employees take less of a raise, but I  could get no support. I made a promise to forfeit all medical and dental benefits, and did – unfortunately, I could not get support from other committee members to sharpen the ax on any of these things.”

Murphy also took credit for helping to get the town’s biggest ratable to locate in town – Murphy’s Market.

“No relation,” he said with a laugh.

Another grumbled establishment complaint about Murphy (a slacker who lives with his sister, is an offhand but common characterization) is that he changed his name – from Robert Farrace to Justin Murphy.

“My parents were in a nasty divorce in 1989 and I took my mother’s side,” he explained.

Murray said Murphy has other problems, one in particular.

“Murphy has no money on hand,” the political scientist said of the candidate who’s running for Congress with less than $15,000.

“Clearly, Runyan can win this thing, but to go up aganst Adler, who has $2 million, he will have to show more fire in the belly.”

In the meantime, Murphy prepares for yet another solo appearance at a Veteran’s for Education forum in Cherry Hill on Thursday. If the Runyan campaign continues to run mostly silent with confidence, the renegade challenger carries his own small campaign swagger.

“People are uninspired by Runyan,” Murphy said. “You have three organizations behind you. Okay. Where’s all the money? I’ve got multiple Tea Party endorsements, and the endorsement of the Inquirer. I’m the pro-life conservative in a two-man race, and George Gilmore in Ocean County is answering questions about (convicted assemblyman) Dan Van Pelt. If I lose, it’s going to be 52-48, not the margin of victory they’re projecting.” 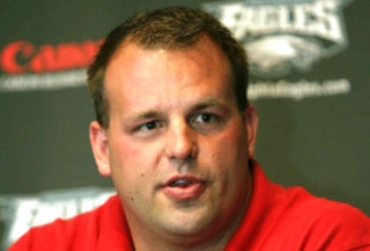