But Girgenti, who will formally relinquish his local party chairmanship at a reorganization meeting tonight to Gardner, made no apologies for opposing last year’s marriage equality bill, which sparked the younger man’s challenge and last Tuesday’s local upset.

“Look at the make up of the 35th District,” Girgenti told PolitickerNJ.com. “I talked to pastors in Paterson, and leaders among Hispanics – they were both opposed to it. We have a strong Moslim population. Opposed. Everyone I talked to was against it. I’ve gotten praise everywhere I’ve gone for voting the way I did.

“I’m not an arch conservative,” the senator added. “I’ve had the support of labor and of progressive groups. I’m a moderate. I support civil unions. I voted for medical marijuana. I voted for what I believe.”

Against the backdrop of legislative redistricting, he hears murmurings out there now of a challenge to his senate seat, but the senator insists he doesn’t intend to go anywhere.

“I don’t consider it a major setback,” Girgenti said of the loss of party control in his hometown. “I am committed to running next year.”

As for rumors of Gardner allies recruiting Assemblywoman Nellie Pou or lame duck Paterson Mayor Jose “Joey” Torres to run against him, Girgenti said, “They’re my friends, and I would hope they support me, but they have every right to run. You’re not ordained. It’s not a monarchy. I really haven’t discussed it with them at this point. Again, I would hope they would be supportive.”

One reason Girgenti said he doesn’t accept the establishment vanquishing news headlines is that the battle was close in terms of raw votes.

“If you look at the outcome, where we won 400 plus districts to their 500, it’s not a drastic setback,” said the veteran senator, who said the similarity of slogans, too (Democrats for Hawthorne and Passaic Valley Democratic Organization) used by both establishment incumbents and challengers, confused voters.

He said he wasn’t making excuses.

“Sure, I’d like to win, but at the end of the day, it’s not a big deal,” Girgenti said. “A lot of our people thought being on the line would produce automatic victory. …It’s a wake-up call. Just to give you an example, my mother won her committee seat, and my wife lost. It was a mixed result.”

Although on the losing side of that leadership brawl, Girgenti, unlike other Democratic senators who lost their committee chairmanships, maintained his hold on the Senate Law and Public Safety Committee.

Of possible redistricting that might inhibit his ability to stay viable as the former Democratic Party chairman of a town that stands outside the power core of Paterson, Girgenti said, “I hope the district remains the same. I don’t take anything for granted.”

The senator pointed to his own vote against the millionaire’s tax when asked about the early performance of Republican Gov. Chris Christie.

“I think he came out the gates firing away,” Girgenti said. “He had support, ,but it’s diminished somewhat. He’s too doctrinaire, too much of a bully, I’ve always tried to work by achieving consensus, not like a dictatorship. His priorities are different from mine. I thought the millionaire’s tax was a reasonable solution to restore senior rebates. A lot of seniors I talk to think they’re getting their rebate checks. I tell them ‘no,’ and they still don’t believe it.”

Tonight, in recognition of Garner’s win, Girgenti will not enter his name for consideration as chairman.

“There are people who wanted me to do that, but I want to build, not antagonize,” he said. “I wrote them a letter and told them of the time and place for the meeting. I congratulated them. I thought it was the right thing to do. Maybe there are people who feel they can do better. But this has always been a Republican town. We disagreed on one issue in my district.” 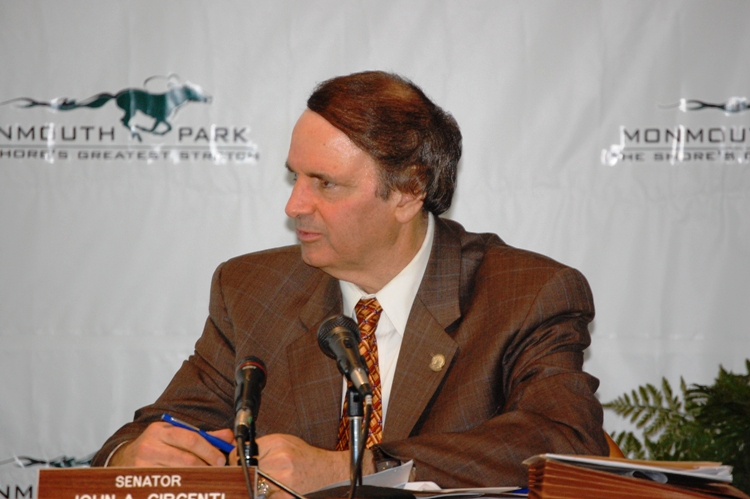