CHEESEQUAKE – This is a tough crowd.

The head of a bull mastiff appears in a senior village doorway but it’s not the dog that objects to Highlands Mayor Anna Little.

“What, are you kidding me? Go the f-k away!” a man in shirt sleeves tells the upstart 6th Congressional District candidate.

“I’m sorry, sir,” she says politely, and keeps moving, crossing the street and heading toward another row of two-story brick and clapboard buildings.

Earlier she approached an elderly woman on a park bench and told her she was running for Congress.

“Sorry,” the woman said behind shades. “I don’t trust politicians.”

“Won’t be voting,” said the woman.

It’s the first upbeat note in a series of otherwise morose encounters.

Sporting a bright red jacket and scarf emblazoned with American flags, Little keeps going, moving double time up to the door of a house where the name of her opponent – Diane Gooch – stands in the window.

She and her campaign skeleton crew pound that and the three other doors in the same cul de sac before leaving with no contact. As they cross the drive, a man in a baseball cap darts onto the sidewalk behind them and, with a jangle of keys, opens the door and disappears into the same house sporting the Gooch sign.

Little goes back there to try to land a convert. She knocks on the door again but meets only a paralyzed silence on the other side.

She maintains the same determined attitude that characterized her all season, heading to the next door and not losing her stride, but at this point, the team of her establishment opponent essentially dismiss her 11th hour effort as campaign trail death spasms.

“I think she’s doing whatever she can do, going wherever she can go,” says Gooch, in a telephone interview.

Little last week put the punctuation mark on her campaign with a Steve Lonegan-anchored fundraiser at the Shore Casino. Asked if Little’s reliance on the endorsement of Americans for Prosperity honcho and movement conservative leader Lonegan is tantamount to the kiss of death in this district, Gooch says, “I think it says a lot, but my focus has been Pallone.”

That’s U.S. Rep. Frank Pallone (D-Long Branch), the sitting congressman awaiting the results of tomorrow’s GOP primary and the voters’ determination of who – Gooch or Little – will face him in the November general election.

As the financially well-connected candidate, Gooch enjoys the support of nearly every Republican elected official in the 6th District, and the tacit backing of Gov. Chris Christie, but it’s Little’s one term and done record as a fight-the-power Monmouth County Freeholder that echoes Christie’s own controversial one term and out record as a Morris County freeholder.

Asked if she ever bucked the tide in her public life, Gooch offers no anti-establishment anecdote.

“I don’t think the mood in the district is anti-establishment,” says Gooch. “It’s anti-government. I tend to work with people in everything I do, it produces the best result.”

Bumped off the line three years ago for asking too many questions at freeholder meetings and now wedded to the Tea Party movement in this campaign as the sole congressional candidate in the cycle with the backing of every group available, Little welcomes the comparison to Christie.

“I have my own mind and I think on behalf of my constituents,” she says. “I think Chris Christie takes a similar approach.”

But if Gooch got the podium wink from Christie and Little instead received the Lonegan bear hug, if Gooch received the roster of elected officials unified behind her and Little got a ragtag assortment of Tea Partiers, the underdog projects a will to win in the closing hours of the campaign.

“I think the people want to be the establishment, and feel closed out,” says the mayor, who approaches a man climbing into an SUV.

“I’m not from here,” he says apologetically. “Essex County.”

Then, as he closes the door to head for the exit of the senior community, he calls over his shoulder to one of Little’s campaign workers with a nod to the candidate, who’s again on the move, “But I hope she wins.” 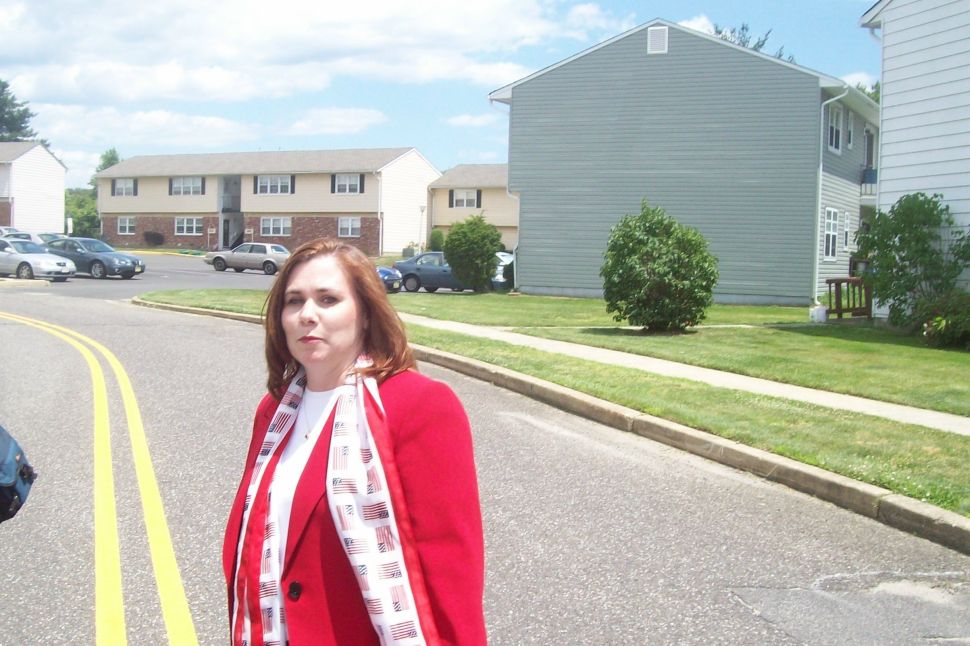