TRENTON – Republican lawmakers reach for their microphones to make the case for his budget – state senators Tony Bucco, Kevin O’Toole and Steve Oroho – in that order.

The ranking Republican on the senate budget committee, Bucco calls the document the “most difficult in history.”

“We don’t have the money to fund everything we would like to fund… everyone of us has something we’re concerned about, but you could have sponsored the bill, you could have made the choices,” Bucco tells state Sen. Barbara Buono (D-Newark).

“We made the choices,” he says.

O’Toole makes the case for Christie as an aggressive ally reversing the course of state spending with $4 billion in cuts.

“We have a hurricane of a governor,” O’Toole says. “We can’t afford spending as we have in the past.”

“Does anyone doubt what the previous administrartion would have done to balance the budget?” asks Pennacchio. “The taxes they would have raised? I am proud of my governor.” 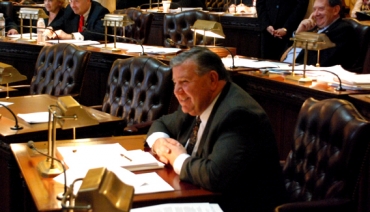