Assemblywoman Linda Greenstein (D-Plainsboro) and other women legislators on Tuesday announced their plans to introduce a supplemental budget bill demanding $7.5 million in funding for family planning programs slashed out of the state budget by Gov. Chris Christie.

“The health needs of poor and working-class families – especially women, mothers and newborns – cannot simply be written off to balance the state’s books,” said Greenstein.  “We have a moral obligation to protect the most vulnerable among us and ensure they receive the care they need to live healthy, productive lives.”

The Middlesex County-based lawmaker is the Democrats’ special election candidate for state Senate in the 14th District, where Sen. Tom Goodwin (R-Hamilton) currently occupies a seat left vacant by the new executive director of the Port Authority of New York and New Jersey, Bil Baroni.

The presence of Vainieri Huttle as one of the bill’s co prime sponsors gives Democrats a box-in option in Bergen, where County Executive Dennis McNerney hopes to hold off the pro-choice Kathe Donovan, the county clerk.

Christie told lawmakers he opposes funding family planning because he is pro-life.

Goodwin’s allies are simultaneously observing the assemblywoman’s votes through the budget season. They delighted, for example, in her abstention of a bill she co-sponsored to study the graduated driver’s license program.

And as she positions herself as a champion on women’s issues, Goodwin seeks to expose her membership in the same Democratic Party that warred with itself in 2006 and shut down government.

Last week, the senator proposed two amendments to the constitution, SCR-109 and SCR-110, to implement changes in budget development – and remind people of Greenstein’s longtime membership in a dysfunctional Trenton political establishment.

“Governor Christie is doing the prudent thing by preparing for the possibility of a government shutdown,” a concerned Goodwin said in a statement. “Sadly, since the last government shutdown in 2006, the legislature has failed to enact strong measures to fix our broken system and to help prevent it from happening again. My fundamental goal is to keep government open so state workers can do the jobs they are paid to do and taxpayer services are not interrupted by the failings of Trenton Politicians.

“The annual budget that we use now is clearly outdated and ineffective and leads to the yearly threat of a shutdown. We must implement a multi-year approach to the state budget, and it is especially critical that the state makes this change in these very difficult financial times.” 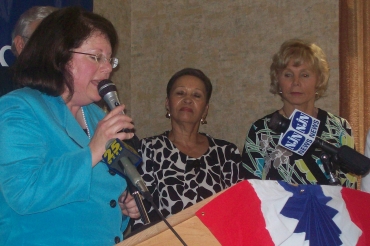