Acknowledging the power of the executive in appointing judges, the panel – which includes former Supreme Court justices – nonetheless specified the intent of the Constitution’s framers to protect the impartiality of the court and noted that a “judge serving honorably and effectively, with competence and integrity,” should achieve tenure in judicial office.

“You have expressed publicly a profoundly different view of the Governor’s appointive responsibilities,” wrote the advisory panel, which was constituted out of a 2006 governor’s order. “This was exemplified by your actions and remarks in refusing to reappoint Justice John Wallace to the Supreme Court, a jurist who indisputably exemplified all the qualifications for honorable judicial service.

“It is a view that is inconsistent with an independent judiciary. Because of our abiding commitment to the independence of the judiciary, we cannot in good conscience continue to serve on the Judiciary Advisory Panel.”

Christie last month sparked outrage in the legal community and armed his political opposition with his decision not to reappoint the moderate Wallace to the bench. In a counter-offensive to Christie’s action, Senate President Steve Sweeney (D-West Deptford) now refuses to grant a judiciary hearing to the governor’s nominee to replace Wallace, former special assistant to the state Attorney General Anne Patterson of Mendham.

This evening, state Sen. Gerald Cardinale (R-Demarest) celebrated the departure of the panel.

“Good riddance to the kangaroo court,” said the ranking Republican on the Senate Judiciary Committee. “They served to knock people out who did not share their liberal view of the judiciary. What’s the lesson? Wearing a black robe does not make you a wise person. I’m so happy they’re going to absent themselves. A gang of elitists.”

“Although at first when the executive order was enacted creating the panel, I was concerned with another level of government, but it was very helpful having this highly qualified panel, including former Supreme Court justices, reviewing the qualifications of potential judges,” Sarlo said. “It’s a shame the judiciary committee is not going to have use of that panel.”

The Governor’s office issued a statement thanking the advisory panel members for their service, and expressing the expectation of making appointments to quickly fill those vacancies.

“The members who resigned are entitled to their opinions, but not everyone shares their views, including others in the judiciary and legal community who recognize the Governor’s constitutional prerogative and authority in this regard,” said Christie Press Secretary Michael Drewniak. “Not surprisingly, the retired justices and others tune out the opposing view that the court has been over weighted by activist judges who have, by their rulings, set tax, spending and social policies for the State of New Jersey — and usurped the role of the executive and legislative branches.  So, sure, there are questions of independence of the co-equal branches of government, but those questions can just as easily be directed at the Supreme Court.” 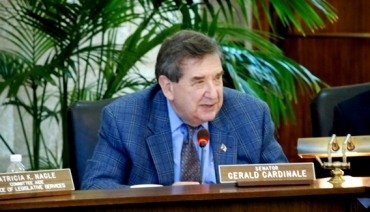