When the Mercer County Democratic Committee reorganizes tonight, eight-year party chairman Rich McClellan will formally stand down.
“I asked that I not be renominated,” McClellan told PolitickerNJ.com.
He doesn’t anticipate a resulting food fight, but would not comment on his heir apparent.
“I think Rich has made up his mind this time and convinced me this time it’s for real,” said Mercer County Executive Brian Hughes, reflecting on the party chairman’s decision in 2008 to resign, just before McClellan reversed and committed to another two years.
“He’s been in there for eight years and has a great list of accomlishments here in the county,” Hughes added. “Rich has told me he is going to stay very close to the organization. We will expect more county victories.”
The highest profile contest in Mercer this November features the 14th Legislative District battle between state Sen. To Goodwin (R-Hamilton) and Assemblywoman Linda Greenstein (D-Plainsboro) in a special election for Goodwin’s senate seat. 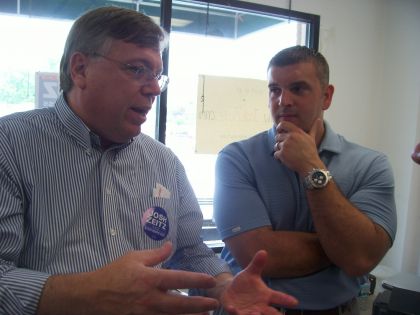