TRENTON – An unidentified man at the corner of Broad and State streets would not endorse Tony Mack for mayor this afternoon when approached by PolitickerNJ.com.

At first he appeared ready to do so, then safely left it at, “I won’t rule out endorsing.”

The reason that’s good enough for a newsflash is it seemed like everyone else in the city had thrown in with Mack Friday as the outside man turned overnight local establishment sensation heads toward his Tuesday runoff against At-Large Councilman Manny Segura.

DPW Director Eric Jackson too announced standing tall with Mack – after draining Segura through nearly a month’s worth of recounts and hanging chad-like subplots.

Same with businessman Frank Weeden, another former candidate for mayor in the ten-person May 11th mayor’s election that ultimately produced Mack (2,357, or 21.6% of the total vote) and Segura (1,862 or 17%) as the top two vote-getters.

The mayor’s selection of old rival Mack to succeed him in the post Palmer held for 20 years held no tinge of special affection – just the added twist of desire not to see Segura in the mayor’s chair.

The fact that Mack already publicly rejected Palmer’s coveted waterworks sale as an $80 million revenue generator for the city produced no conflagration of ideas here with four days remaining in the 2010 Trenton mayor’s contest.

The waterworks sale is on the ballot Tuesday, same as Mack versus Segura.

Given just a few days left to campaign, and with the endorsements and demographics of the city against him, Segura tries to bill himself now as the last remaining anti-establishment figure left on the political landscape; and his logic runs like this: Mack welcomed the backing of the mayor, who desperately wants the waterworks sale, which makes Segura a purer political option for those who don’t want the waterworks sale.

Come Tuesday, Segura’s forces argue, vote against the waterworks sale and for the most loyal opponent of the sale left in the race: Manny Segura.

“Rolling out enough politicians to fill an abandoned house doesn’t change the fact that Tony Mack has no plans to fix that abandoned house,” Segura griped.

“The fact is that the people of Trenton deserve better than politicians detailing the laundry list of Tony Mack’s problems while they are endorsing him. It is time for us to demand better than more of the same.

“I have a plan for this city to educate our children, bring jobs for our residents and make our streets safe for us to walk to work and allow our children to play outside,” added the at-large councilman. “One hundred politicians, one thousand press releases and an endless stream of lawyers trying to stand in the way of the people’s will are no match for that plan.”

But the May 11th results combined with a cursory reading of the demographics (52-22% African American/Latino) here favor the homegrown African-American Mack over Dominican American Segura, a transplant from Perth Amboy who arrived in politics as an ally of Palmer’s before his own relations with the mayor turned sour.

The one candidate from the mayor’s race who decided to stand with Segura in the runoff was businessman John Harmon, who placed fourth in the May 11th clash behind Mack, Segura and Jackson.

On Friday afternoon, Harmon walked down the big staircase of the old victorian manse that houses Segura’s campaign HQ on Greenwood Avenue.

“They just threw us a big fat pitch that we can knock out of the ballpark,” said Harmon, himself a former ballplayer like Segura.

It was a reference to Mack’s decision – after running as an outsider throughout the course of the campaign – to activate Palmer and his speed dial of instant establishment heavies to lend weight to the Mack mayoral bid.

“How can he be credible now on the waterworks sale?” wondered Harmon. “He’s damaged his brand.”

He hit the streets with Segura, standing outside a local supermarket with the councilman, whose long odds to Tuesday hardly impeded the electric current that is Segura’s brand on the campaign trail.

Segura’s street level campaign style is most like Mack’s of all the other candidates in this year’s campaign.

For the moment, the two street guys remain standing.

But Mack has the backing of the establishment now to round out the prodigal son storyline, and Segura has just another candidate on the fringe of the power grid and a few days to make the case for City Hall – that he’s the most credible Trenton outsider.

“The mayor’s race?” a woman asked Segura, who approached her with a grin and outsretched arms.

“I already voted in that,” she said, as she pushed her shopping cart toward the lot. 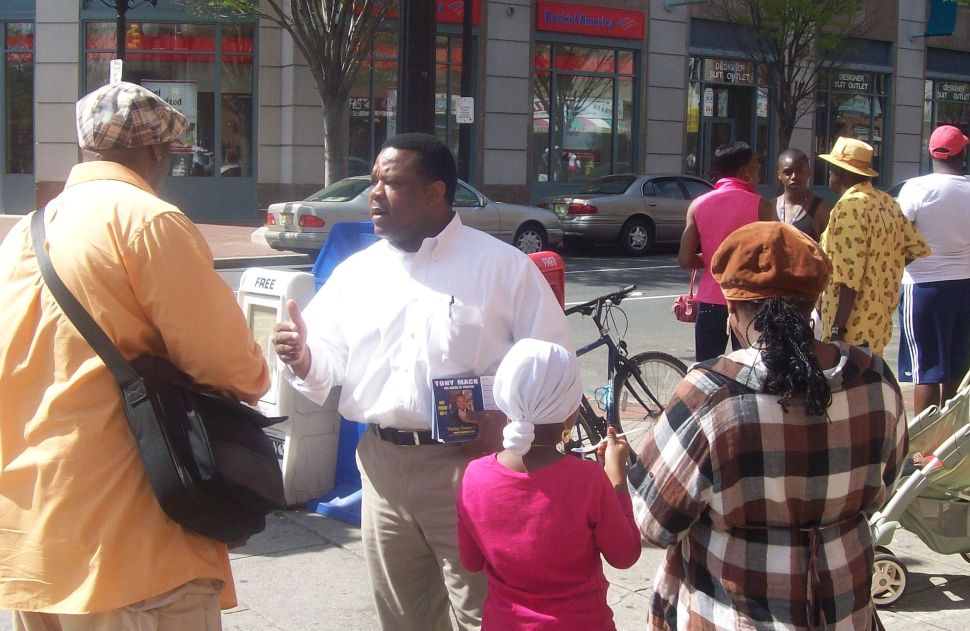