As the successor of a scuffed up and now exonerated Joe Ferriero, Bergen Democratic Chairman Michael Kasparian today released a statement on the United States Supreme Court ruling on “honest services.”

“While I am glad that the individuals impacted under the ‘honest services’ ruling will now be able to clear their names, the fact remains that this favorable opinion for the former leadership of our party has no impact on the current Bergen County Democratic Organization, its leadership, or the campaigns of Dennis McNerney, Leo McGuire, Jim Carroll, Liz Calabrese or John Hogan,” said Kasparian, who assumed the chairmanship of the organization following Ferriero’s resignation last year to confront corruption charges.

“While Bergen County Republicans will most certainly attempt to make today’s ruling an issue for the campaign as opposed to a discussion of records and ideas, the Supreme Court has handed down their ruling and no amount of disingenuous carping from Democratic opposition will change that.

“As Chairman of the Bergen County Democratic Organization for the past year and a half, covering two election cycles, I am proud of the significant strides we have made as a party. We have led the charge against disproportionate Republican cuts to our County’s education funding that will equate to massive municipal property tax increases, along with expanded classrooms for our children and debilitating program cuts.  We stood up swiftly and strongly against the Republican plan to repeal Bergen County’s Blue Laws to fill a $65 million state revenue hole at the request of the New Jersey Retail Merchants Association and we will continue to fight against the proposal to eliminate Bergen’s Blue Laws at Xanadu.

“Today’s decision does nothing to deter the real concerns Bergen residents have about these Republican plans for our county. The fact remains that these Republican ideas are simply inequitable and wrong for the citizens who call Bergen home. We Democrats will continue the fight to maintain our quality of life that is daily threatened by those who would sacrifice it to pay for their own political agendas.” 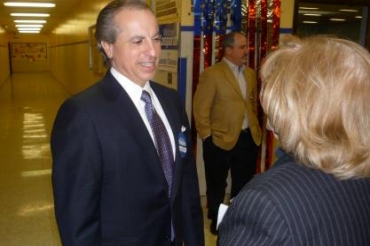