The bills passed with some distributed Democratic Party assistance.

At the end, state Sen. Paul Sarlo (D-Wood-ridge) called a recess, and when senators pushed back their chairs and headed for the exits, they grumbed about Sarlo’s claim that they might be called back “at a moments notice” to access the school vouchers bill.

On Senate Bill 2096, a banking and insurance bill, state Sen. Sandy Cunningham (D-Jersey City) joined the Republicans voting aye. Under the provisions of the bill, “revenue from the “FAIR Act Administration” taxes would no longer be dedicated to the department’s administrative costs and the special purpose assessment would instead be the source of funding for the administration costs of the department.”

On Senate Bill 2112, Senate Budget Chairman Sarlo votes to move it to the next stage. Sponsored by Sen. Tony Bucco (R-Boonton), the bill “modifies the State’s unclaimed property laws to adjust the time periods for presumptions of abandonment, limit issuer imposed dormancy fees, and provide for related administration of certain unclaimed property.” 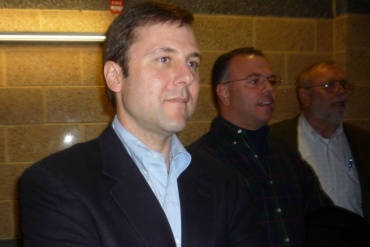