It’s in the stare down phase in the 7th Congressional District.

“Malzberg said Leonard declined to appear on the show with Larsen,” said Lance spokesman Todd Mitchell. “We were never asked, so Leonard tried to get on. They offered the 5:05 p.m. slot.”

When he first spoke to Larsen, Malzberg told the Tewksbury businessman, “You’re exactly what we need in Congress and you’d be replacing a guy who, I said, has gone along with Nancy Pelosi on cap and trade, possibly the most restrictive thing that could be done to businesses in this time of high unemployment.”

“He was one out of only eight Republicans who voted for cap and trade,” said the challenger, who later complained that the country is going “down the road of socialism.”

One of three Republicans running to Lance’s right in the primary tomorrow, Larsen defended his late payment of taxes with interest when quizzed by the talk show host.

Demanding equal time, Lance called Malzberg after Larsen hung up and the radio show host poked him on his cap and trade vote.

“How could they trust you not to do something like that again?” Malzberg asked.

Lance argued with the talk show host on the issue and tried to make his case as a fiscally conservative congressman. 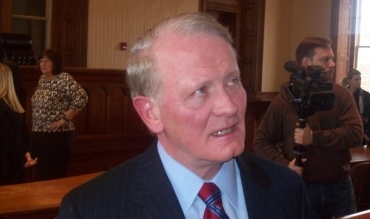