Ordinarily outshone in the Republican constellation by the bigger and more muscular Monmouth County, Middlesex coming out of the Republican Primary last week could lay down the boast that while the Monmouth Republican organization sputtered on Election Night, Middlesex delivered.

It was no overwhelming effort in a low turnout environment, but the GOP Middlesex establishment – such as it is – nevertheless performed well enough to produce victories for the same two A-line candidates who on the same night went belly up in Monmouth: Rumson newspaper publisher Diane Gooch in the 6th Congressional District, and Princeton venture capitalist Scott Sipprelle in the 12th District.

“Monmouth was the biggest surprise of the night, where everyone expected the organization to carry the candidates very handily,” said Middlesex County GOP Chairman Sam Thompson, who last night received the unanimous endorsement of the committee for the chairmanship while his Monmouth counterpart struggled to stay atop the party throne.

“If you looked at the numbers for Scott (Sipprelle) early, he was losing to David Corsi until the votes came in from Middlesex, where he won,” Thompson said of Sipprelle. “That reversal got Scott the nomination.”

Simultaneously sinking that night in Monmouth, Gooch also got a boost from the Middlesex numbers – winning every town but two – but finally not receiving enough juice to get her past Highlands Mayor Anna Little, the Tea Party Approved anti-establishment candidate, who comparatively rocked Monmouth.

In part embarrassed by the results in her home county, Gooch yesterday formally succumbed to Little, deciding against pursuing a recount and letting her rival’s 84-vote margin of victory stand.

“At the reorganization meeting last night, I advised everyone they we must all must work to ensure the election of Anna Little ensure the defeat of Frank Pallone,” said the new GOP chairman.

“We’re both on the same track, and we talked about how we can coordinate the efforts of the Tea Party and get everyone  working from top to bottom. I have known Anna for years. I like her. She’s a little dynamite. If Diane hadn’t been in the race, I would have supported her. It wasn’t that I disliked Anna, and now I have no problem being with her 100 percent. I’m delighted the Democrats are licking their chops.

“This is a unique year,” the chairman added. “There’s the angst of the public. You’ll be getting people out there against (6th Congressional District Democratic incumbent) Frank Pallone and for Republicans who normally wouldn’t consider it a winnable district. I’m delighted that Frank Pallone is going to run on his record. He may think it’s the greatest thing since iced tea, but it’s not what the people want.” 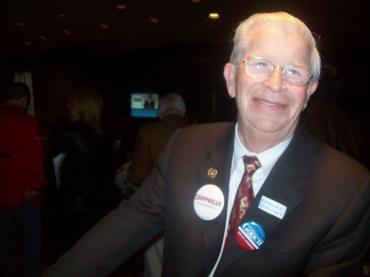