As the budget nears its final lap, the state teacher’s union trained its sights on property tax caps, taking aim at proposals from both parties in a statement issued Friday.

While it criticizes all proposed caps, the release from the New Jersey Education Association is mostly aimed at Gov. Chris Christie who has scuffled with the teachers’ union since taking office.

Christie has proposed a constitutionally enacted cap of 2.5 percent that would have few exceptions.

“For months, Gov. Christie has been trumpeting a plan to sharply reduce property tax growth by imposing a 2.5 percent limit on property tax increases, while promising that schools and municipalities will not be hurt,” the release states.  “Anyone who doubts that such caps will have real, harmful consequences for our schools and communities should look at what has happened where they’ve been tried.”

Citing California in the 1980s, the union argues that a cap will devastate the state’s schools, boosting class sizes and forcing teacher layoffs.

“We really can’t put much stock in the usual doomsday proclamations from the NJEA because what we have learned is those proclamations are always self serving,” Drewniak said. “We are tired of them masquerading that it’s all about the kids.”

But the NJEA does not limit its ire to Christie, also using the mailer to bat down a 2.9 percent cap proposed by Senate President Steve Sweeney, (D-West Deptford).

“There is no connection between an arbitrary cap – whether it is 2.5 or 2.9 percent – and the actual cost of providing an education. Either cap would put a stranglehold on our classrooms, and shortchange at least a generation of students,” the union’s release said.

Asked to respond to the NJEA’s charge, Senate Democrats’ spokesman Derek Roseman said in pushing his cap, Sweeney has made clear that New Jersey is different than other states that have tried a cap.

“It seems that the NJEA is in agreement with what the Senate President plainly said before the Senate Budget Committee yesterday on why his plan is responsible: New Jersey is not Massachusetts, nor is it California,” Roseman said. 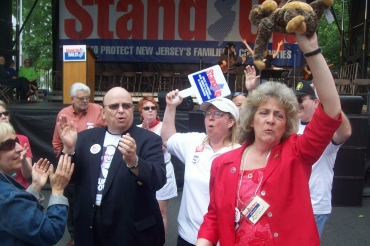