Staggered by last year’s multiple corruption charges and with the sentencing of Deputy Mayor Leona Beldini a two-day old headline, members of the Hudson County Democratic Organization piled into Public School No. 6 in Jersey City tonight and backed Bayonne Mayor Mark Smith – without incident – to be the new chairman.

Jersey City Mayor Jerramiah Healy, the outgoing chairman, handed the scepter of the battered party realm to Smith, a former beat cop, who bucked up those jaded or doubtful members of the group with the fact that – between May 11th and last night – his slate dominated the council races in Bayonne.

The group was broken into three overlapping camps: those too entrenched to care; those with close operational ties to Healy and Hudson County Executive Tom DeGise who want to re-elect DeGise next year and feel relieved to have an ally in the jovial Smith; and those jittery allies of U.S. Sen. Bob Menendez (D-Hoboken) who don’t want a nice guy neophyte as much as organizational discipline.

Menendez is up for re-election in 2012, and between now and then, his supporters want to see a firmed-up operation and a willing defender of Democratic Party interests when Gov. Chris Christie and the Republicans inevitably go on the political offensive here.

Their first choice for the job didn’t make the meeting.

That was Union City Mayor Brian P. Stack, who treats every token opposition race as an opportunity to get hell bent about scoring a personal best of raw voter turnout.

In the room tonight instead were Healy and Degise, of course, and – in a sign of affirmation – Menendez State Director Mike Soliman; along with North Bergen Mayor Nick Sacco, Hoboken Mayor Dawn Zimmer, Weehawken Mayor Richard Turner, Seacaucus and Kearny chiefs, and a subdued crowd of Jersey City committee members.

As he considered taking job himself earlier last year, Stack looked at the numbers in the 2009 gubernatorial election, when Jon Corzine mustered 82,075 Hudson votes on his way to statewide defeat, a respectable  figure relative to Menendez’s vote total of 88,696 in 2006, but unacceptable, in Stack’s opinion, when considering Republican turnout in Ocean and Monmouth counties last year for Gov. Chris Christie and the potential for Christie to mobilize more GOP voters.

Stack said he thought he could dredge up 115,000 votes to make Hudson again a viable stronghold of Democratic Party power.

Other sources say they don’t know if Stack, Smith or anyone else could drive those kinds of numbers, but if Smith can leave Union City and North Bergen political organizing to Stack and Sacco respectively, work with the mayors in the other outposts, and – and this is most important – producively rouse the beast that is Jersey City for 2012 output, he will earn respect as chairman of currently troubled organization. 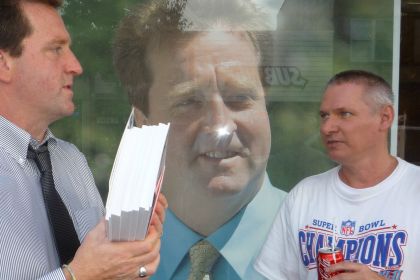