TRENTON – Collision course.
Sources close to Assemblywoman Alison McHose (R-Franklin) say she is dug in against Gov. Chris Christie’s budget, while operatives close to the governor have told expectant Democratic Party leaders not to get too excited – that Assembly GOP leadership is confident they can bring her in.  Democrats say noody from the GOP has yet reached out to ask for an addiitonal vote in the assembly, a sign that Republicans still feel they can turn McHose around.
Her biggest beef remains the school funding formula.
Short of the governor kayoing preschool funding in the urban districts and redistributing that money in rural and suburban districts, McHose intends to remain rogue.
“She’s off everything,” said the source. “Everything. No taxes. She will go in to listen to what they (the governor’s office) have to say, but as it stands right now, I sincerely doubt that anything will change.”
Along with Assemblyman Michael Patrick Carroll (R-Morris Twp.), McHose is one of two Republican assembly people committed to voting no on Christie’s budget.
The GOP lawmakers’ decision has stalled the process as Christie and his allies frantically try to embrace them to prevent giving Democrats an opportunity to land more concessions. 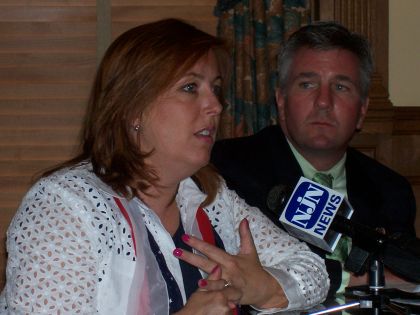