Over the weekend, the party’s two resident alpha males from separate halves of the state finally banged into each other as Sweeney unveiled an alternative tax cap plan and Booker signaled that he would back Christie’s proposal of 2.5%.

Seated in his office this afternoon hours after Booker stood at a podium with Christie, Sweeney defended his version against the governor’s and indicated his disappointment with Booker for supporting the Republican governor’s – not the Democratic Senate President’s – version.

“If this cap is put in place, Newark will be much worse off than it is now,” said Sweeney, who speculated that the governor’s option would require the issuance of walking papers for 3,500 to 4,000 city employees.

Sweeney said that the late game entry of his property tax proposal should serve as no excuse for the mayor.

“If you’re walking off a plank to fall into a river, you can stop,” Sweeney said. “I have no ill will toward the mayor. But he made a major mistake.”

Booker said later in a telephone interview, “My focus is on trying to move our city forward, not making this about 2.5 percent or 2.9 percent. This is about real reform, and Senate President Sweeney’s leadership is critical in bringing about that reform.”

Sweeney said he is convinced Christie’s plan won’t work because it allows no mechanism to correct what his 2.9 percent statutory version could  with one scheduled reconvening of the legislature in the event the cap is too onerous on local government and taxpayers. What if there is a spike in gas prices, for example, Sweeney wondered.

In his close quarters communications with reporters this afternoon on the subject, Sweeney said he arrived at the 2.9 figure through a simple assessment of inlfation. He said he made the decision to issue the release announcing his cap alternative on Saturday in time for the Sunday papers.

The senate president said he intends to hold July hearings on the governor’s cap alternatives. He would not speculate about the specific date – this coming Thursday or next Monday – for a budget vote.

Sweeney convened his press availability moments after the Assembly deep-sixed teh Democrats attempt an override of Christie’s millionaire’s tax veto from last month. Republicans voted unanimously against the measure.

“The Republicans today proved that blind loyalty to their governor is more important than standing up for their constituents,” he said in a statement. “Their slogan of ‘shared sacrifice’ isn’t worth the bumper sticker it’s printed on.”

But Republicans milling around outside the chamber were already gleeful at the perceived civil war between Christie and Booker. 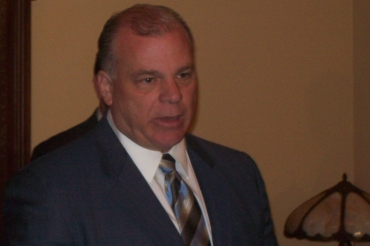