David Von Savage shook off the punch he took at the ballot box last Tuesday by going on a long, liberating bike ride on Saturday: from High Point down to his own Cape May, the tenth time he’s made the trip since 1999.

Chairman of the Cape May Republican Organization for 14 years, Von Savage endured the loss of his two freeholder candidates Ralph Bakley and John McCann to insurgents Gerald Thornton and M. Susan Sheppard 28-22% last week in what he calls a “perfect storm” against incumbents.

“It hurts. You long for vindication,” he told PolitickerNJ.com a few hours before his figurative walk up the steps of the court house in Cape May tonight to officially resign as chairman and hand the gavel to attorney Mike Donohue, who runs unopposed.

“You’ve been villified and you want to figure out how to get back, but I made my announcement to my leaders last week,” Von Savage added. “I thanked my leaders, and I asked how they wanted to handle the convention. I appointed a chairman pro tem to run tonight’s meeting. It’s my time to fade. It’s the right thing to do. It was so divided, the best thing I could do was bail. You have to know when to fold, and like my wife said, ‘You live by the sword, you die by the sword.'”

Among current or just retired GOP chairmen, Von Savage is the fourth longest serving Republican in the state after Henry Kuhl in Hunterdon (30 years and counting), Dale Florio in Somerset (18 years), and George Gilmore in Ocean (16 years).

Departure after last week’s loss presented the right narrative arc for Von Savage: to start as an insurgent ally of Frank LoBiondo’s in 1994 against the establishment forces of Bill Gormley, and to finish at the hands of another insurgency – one that the hard-edged conservative leader relishes as a groundswell against Democratic Party power.

Plus, he departs just over seven months after the figurative high point of his career as GOP chairman: the election of Gov. Chris Christie.

“I was proud to have played a small role in his election, and now the rest of America is looking at the reform agenda that Chris is championing,” said the outgoing party chair. “The big business interests of GM that Ralph Nader once railed against have been supplanted by government employee labor unions. Those guys have eclipsed everything because the Democrat Party and weak-kneed liberals have buckled to that element of organized labor. Glenn Beck is the zeitgest and he’s taken talk television to a totally different level with a single message: people are ready to seriously take back their country.

In that vein, Von Savage takes pride in Cape May County, where he was born, what he sees as a bastion of conservative Republican Party values.

“We were red and rogue before it was fashionable to be red and rogue – lowest tax rate in the state, coupled with quality county government – a real contrast to that idiot in the White House.

“What do I deem to be his worst transgression?” he added, in reference to President Barack Obama. “I don’t know, it’s so pervasive to his soul and his psyche. He’s basically a menace because people are scared to death of this guy. They have a deeply held responsible concern toward his style of radical government.”

Shutting down his political life as a county committeeman and chairman to focus fulltime on his insurance buisness, Von Savage said the committee’s main focus over the course of the coming months will be sharpening itself into fighting shape for the 2011 Legislative contests and a shot at Democratic state Sen Jeff Van Drew.

“I don’t think Adler has a prayer,” he said. “Why? He’s an incumbent Democrat who’s part of the Obama agenda and that’s enough. New Jersey’s no longer blue, a situation best characterized now by the style of Christie’s leadership. It’s the most refreshing thing.”

“I don’t want to get into that,” he said. “My opinion doesn’t matter. The one thing George Bush did was embody the idea that when you’re done, you have to defer to the new leadership. All I will say is I am totally supportive of the new county leadership and confident in the decision-making process of the party.”

As for future office—like a run himself against Van Drew—”It’s not even an option,” Von Savage said. “Some people have said that, but if I did that my wife would stop it. She’s already got me hanging curtain rods. I’ve got my family, my faith, my great life at the Jersey Shore. 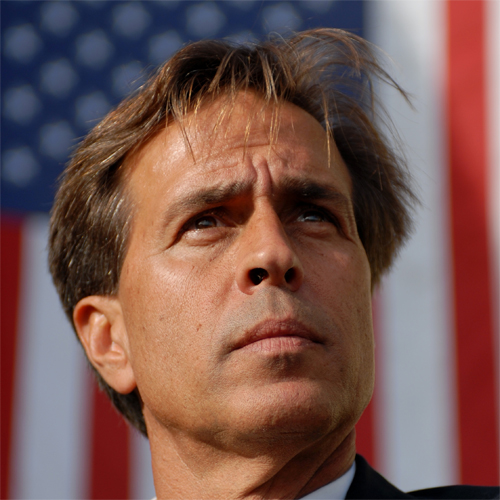