NEW BRUNSWICK – The trouble with a lot of first-time candidates for office is they don’t know the political terrain as well as incumbents who have won elections.

Here the June 8th challengers of a 20-year office holder who never had to run hard, work with the idea that they’re better connected to the voters than a complacent political establishment built by aging white males.

Attorney Patricia Bombelyn has less money than Mayor Jim Cahill, lacks the name ID of a two-decade brand, and lacks the sustaining party infrastructure of the local Democratic machine in a primary election. Much of her university town base is transient by definition. For all her grassroots party organizing and coalition building of Latinos, Blacks and college students, she also said publicly what a lot of other people thought about Jon Corzine: that he was a dud, an assessment Cahil now exploits as evidence of her support for Gov. Chris Christie – a Republican.

But in addition to repeatedly hitting the change theme, making the case that Cahill excelled with downtown development but neglected the neighborhoods, and building on last year’s near-win on a referendum question to create a ward government in New Brunswick, Bombelyn and her allies take heart in the fact that women constitute 57% of the city’s primary voting population.

They’re trying to create a Middlesex County pattern here with this election, expanding on the 2008 victory of Wilda Diaz over veteran incumbent Mayor Joe Vas in Perth Amboy, and the 2009 win of Toni Ricigliano over Mayor Jun Choi in Edison.

And they’re counting on the high energy output of the campaign.

On Thursday night, Bombelyn went door-to-door in a working class neighborhood on the far side of Route 18. Accompanying her was Leslie Fine, daughter of a labor leader and as relentless as the candidate herself in pursuing votes.

“Are you registered to vote?” Fine asked two men on a balcony as she and the candidate passed below.

“Is there anyone in the house who is? Do you know anyone who is?”

She pursued that line of questioning at each door until she secured names and numbers.

“We found that in some of these neighborhoods, they’re so transient with Rutgers students and workers, that the voter rolls don’t accurately reflect the population in a lot of cases,” admitted a veteran operative working with Bombelyn. “We registered 400 voters this way, and got commits for votes.”

It doesn’t sound like a lot. Then one realizes that Cahill typically wins no-contest elections in New Brunswick with fewer than 900 votes (out of a total possible 6,930 registered Democratic Party voters).

Taking credit for registering substantial numbers of new voters in the 2008 presidential primary here, student organizers working for the challenger lampoon the mayor’s campaign efforts as hotdog and beer party retreading from the early 20th Century.

Some of the older members of Team Bombelyn remain wary of the mayor’s built-in advantages, including his backing from police and fire.

Experts say Cahill is the favorite.

“If this election were held during the school year, there might be a different result, given the challanger’s studdent backing,” said Patrick Murray, political scientist and pollster with Monmouth University.

Acknowledging Cahill’s presence on the campaign trail, “At the very least, maybe we’ve made him a better campaigner,” said Martin Perez, founder of the Latino Leadership Alliance, and Bombelyn’s husband.

It won’t be enough, he added.

Once an ally of Middlesex County power broker John Lynch, for years Cahill didn’t have to walk.

He still occupies Line A and runs under the recognizable Democratic Party power structure headed by U.S. Rep. Frank Pallone (D-Long Branch), but this time he walks.

A woman in a straw hat arrived at Bombelyn headquarters Thursday night, collapsed into a chair, and announced to everyone in the area that Cahill could take his hotdogs and his buns and hightail it, as far as she’s concerned.

“First time I ever saw him in the neighborhood,” she said.

Later that night, another door opened in a brick apartment complex at the edge of the highway.

A working class face stared out of darkness at the woman on her doorstep.

“Hello, I’m Patty Bombelyn, and I’m running for mayor, the mayor’s been there for 20 years and it’s time for a change,” the challenger told the prospective voter. “The downtown looks great, but building a footbridge across the highway is in my platform.” 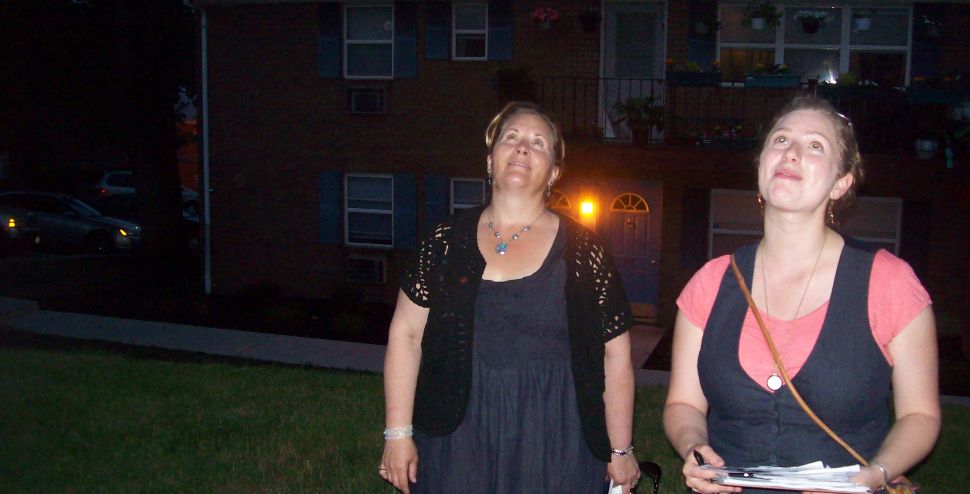