In March, the governor submitted a $29.3 billion budget and quickly turned the obstacle of a Democratic Majority into his greatest strength. He pitted his establishment adversaries against one another in Machiavellian fashion, and drove his argument with a series of town hall meetings while playing the role of ultimate aggressive Trenton outsider. Withstanding the hardest criticisms over his initial proposals to close Hagedorn Hospital and ban Bergen Blue laws, Christie restored $180 million in funding for those programs and others in order to land necessary Democratic Party votes and avoid a government shutdown. His budget at the end reflected 99% of what he wanted, gains made all while Christie fought a successful war with the New Jersey Teachers’ Association and landed the bulk support of local mayors for his property tax reform legislation.

When the budget process hit turbulence toward the end last week, Christie dispatched O’Dowd, his deputy counsel, to take personal charge of the situation, nail down who was on the budget and who was off, and why and serve as BlackBerry operator-in-chief to avert disaster. A former U.S. Assistant Attorney, O’Dowd in one week proved his mettle as a problem solver adept at getting into the inner workings of Trenton government.

The Essex County lawmaker proved boiler room ready as he worked with O’Dowd to get renegade Republicans Jen Beck, Diane Allen and Mike Doherty on board in the Senate, and went to the other side of the legislature to negotiate with Alison McHose and Michael Patrick Carroll, contributing guile and personal history to eventually get them to sign onto the $29.4 billion budget.

The mountain man lawmaker from Warren County looked like a no vote on the budget before working across the aisle with Sen. Richard Codey (D-Roseland) to secure funding for Hagedorn Hospital, which sits in his district. The establishment relaxed. Doherty was in. But then he went AWOL from the budget committee in protest of several budget supplemental bills and threatened to stay there until he landed critical concessions. After personal negotiations with the governor, Doherty secured the death of a business tax and reform of the gift card bill before committing to vote for the budget. At the end he proved his ability to gingerly negotiate that no-man’s land between the GOP establishment and the wilds of Warren County.

When DiVincenzo won his first election in 2002 he took charge of an office that had previously been run by a string of execs who left in handcuffs. Sitting in a chair that felt ominously like a sentence, a chilled DiVincenzo told new U.S. Attorney Christie in a telephone conversation that he was committed to running the operation right. Now, eight years later, DiVincenzo, nursing an eight-year relationship with the freshman governor, took a hit in the budget like everyone else. But after getting cut by $22.1 million, he negotiated $16.8 million in restorations: $15 million for a drug rehabilitation program and $1.8 million for a pilot program at the prosecutor’s office. In addition, the governor helped DiVincenzo secure $7.7 million from the Port Authority of New York and New Jersey to purchase land for park development.

Rank and file Democrats privately complained that their leaders weren’t fighting hard enough through the budget process. Senate President Steve Sweeney (D-West Deptford) appeared to throw one punch – and miss – for every head-snapping series of combinations thrown by the governor. Moreover, while his predecessor shrank from his own throne and appeared overshadowed by then Senate President Dick Codey, Christie seized the bully pulpit with relish. Christie appeared as the man in charge juxtaposed against the small bore clash of Democratic egos jockeying for position in the legislature. Not only did Sweeney and Senate Majority Barbara Buono (D-Metuchen) stake out opposing views on budget priorities, but the assembly leadership warred with Sweeney, as Majority Leader Joe Cryan (D-Union City) found himself isolated from Christie, and Speaker Sheila Oliver (D-East Orange) appeared handcuffed to Essex County Executive Joe DiVincenzo. As those dramas played out, there was no productive mutiny on the part of Democrats, who rode out the process and offered up 11th hour protestations before rolling over and offering up the needed votes to move the budget.

The loser in last year’s gubernatorial primary shredded Christie’s budget as a cave-in to Democratic urban fiefdoms and special interests, scoring points in both conservative and Democratic circles for his point by point breakdowns of why he thinks the governor’s priorities are wrong for New Jersey. But he badly bungled the political ground game as he pressed a strategy of Michael Patrick Carroll, Alison McHose and Mike Doherty as can’t-miss Manchurian candidates primed for a hard right 2011 takeover of northwest New Jersey. Doherty played his own negotiating game with the governor, leaving Lonegan to triumphantly tweet bunkered-in dispatches on the principled stands of McHose and Carroll even as they folded under establishment pressure.

Scion of a prestigious political GOP family whose father had a reputation in the senate for horse trading and bringing home the bacon, McHose went into her behind the scenes sit-down with the governor committed to holding her ground. She wanted $600 million plus rerouted from urban pre-school into rural and suburban districts. The governor did not want to cough up more concessions to Democrats. The collision course resulted in a woozy McHose putting up a budget amendment designed to save face. It died just as fast before the Assemblywoman registered her aye vote on a budget she hated.

Sustaining $1.3 billion worth of school aid cuts, the powerful teacher’s union fought back with an air war against the Republican governor. When a majority of school budgets failed and Christie proclaimed victory, the union amped up its street presence and took comfort in a legislature packed with lawmakers who through the years had warmly received numerous NJEA campaign contributions, endorsements and campaign help. No matter that the Democrats sided with Christie on pension reform and key party leaders – a willing governor on their side – pressed vouchers and charter school bills, the word was out. A fight was coming. But when Dems struck another deal with the governor and landed a handful of concessions, the union received nothing from the transaction – nothing except the sinking feeling that their frontline soldiers had taken the money and run.  The union was left with battered budgets and a dinged reputation as collateral damage.

TOO EARLY TO TELL

New Jersey’s celebrity statesman didn’t endorse the budget, but he signed onto Christie’s 2.5% property tax reform package in the middle of the budget process. Booker’s move contributed mightily to the telling theatrical image of the state’s most visible Democratic Party mayor lining up with a Republican governor in the middle of a would-be warzone. No stranger to crisis, the mayor and Newark happen to face a $100 million budget deficit disaster. Booker needs an ally in the governor, who ultimately controls the purse strings in a city mostly dependant on state aid. The short-term gain for Booker is an intensified alliance with Christie, and a commitment from the governor to help create a revenue-generating municipal utilities authority. But the longer term political consequences for Booker could include a weakened ability to counter Christie in a statewide general election.  Booker also placed himself between the two major forces in state politics, Christie and Senate President Steve Sweeney (D-West Deptford) who had proposed his own cap and later chastised Booker for not signing on.

Republicans boast that Christie’s budget is $4 billion smaller than last year’s and doesn’t raise taxes. The governor says his budget, coupled with a constitutional cap on property tax hikes of 2.5 percent, will ultimately drive down the cost of living and recalibrate a state that has turned into a runaway government gravy train. But Democrats claim the governor’s budget simply redistributes taxes to other areas, with increased transportation costs, reduced rebate checks for seniors and – arguably at its worst – crushing burdens on local government as a consequence of $60.5 million cuts in municipal aid. In the judgment of Senate Budget Committee Chairman Paul Sarlo (mayor of Wood-Ridge), Christie’s budget will result in the “biggest property tax hike in New Jersey history.”

The bellwether 14th Legislative District features this special election matchup between Goodwin, a Republican who lined up with his party in favor of Christie’s budget, and Greenstein, who voted no. Its proximity to Trenton makes the 14th home to large numbers of government workers aggrieved by Christie’s budget cuts. But behind every other door is an angry taxpayer. The district is 2-1 Democrat, but there are almost as many staunch independent voters as Republicans and Democrats combined. Ultimately, the winner of this race will be the candidate who can corral the independents; and it will be a test of the governor’s popularity if Goodwin can fend off sturdy veteran Greenstein and her organized labor allies. Political watchers are calling this race the “canary in the coal mine” because of its potential foreshadowing of 2011 when every seat on the legislature is up for grabs.<–> 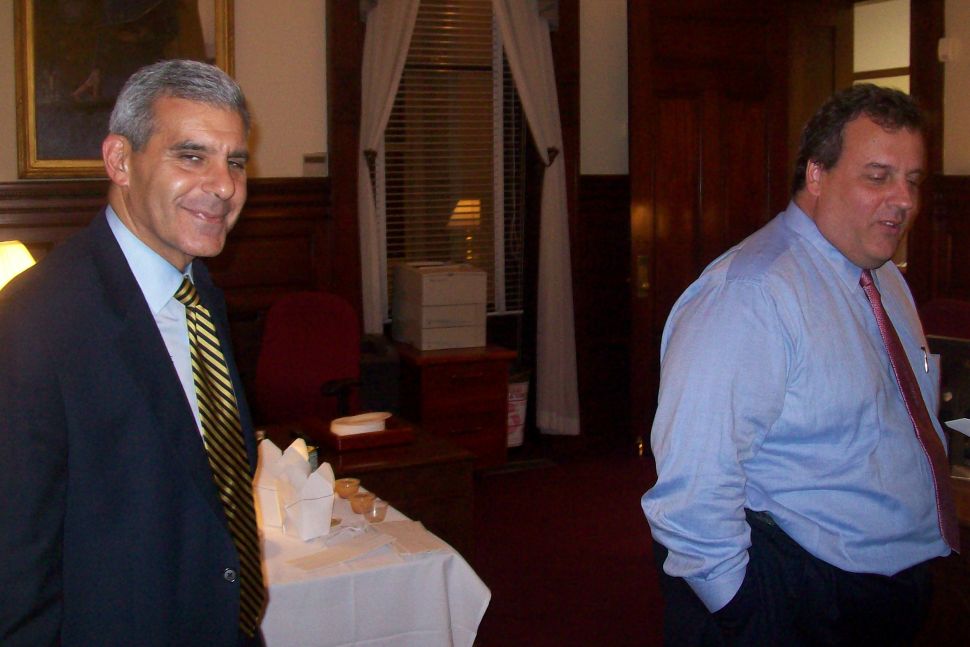