NEWARK – Unless she sees at least one significant alteration to the state budget, don’t expect to see Assemblywoman L. Grace Spencer (D-Newark) follow her District 29 mate’s lead on Monday with an aye vote.

“There are things that would be necessary in this budget in order for me to vote for it – starting with family care,” Spencer told PolitickerNJ.com. “No one wants to shut down government, and I’m not going to be the lone dissident who contributes to a government shutdown, but my first responsibility is to a safety net for my constituents.”

“It’s not politically the right move or the conventional move for our district,” admitted Coutinho, a lifelong resident of the East Ward, a politically toothless district when comparing its voter numbers to the North, South and Central wards.

“But I’m genuinely concerned about the tone of this discussion, and I’m willing to work with everybody,” the assemblyman explained. “We have serious structural problems in the state, and unless we change them, we will never get there.

“The condition that I put out there is that, in the same way I’m taking a bullet to vote for this budget, when the consequences of this budget are made manifest, and they will be – I anticipate, for example, an increase in violence in Newark with the loss of program funding – Republicans will consider the solutions with the same open-mindedness and positive spirit. As I said yesterday, closing government is not an option.”

While their moves may set on edge the teeth of battle-scarred Democrats who don’t want to see their party accomodate Christie’s budget, Ruiz’s and Coutinho’s organizational ties to Steve Adubato’s powerful North Ward Democratic organization put them in a political safety zone as long as DiVincenzo and Adubato approve of their votes.

Not only did DiVincenzo already tell Coutinho he has his back, Assembly Speaker Sheila Oliver (D-East Orange) thanked him “for falling on his sword” by providing a Democrat vote to move the budget.

An affirmative vote by Coutinho would place him in the company of an originally anticipated eight Assembly Democrats required to vote aye in order to pass Gov. Christie’s budget. The rogue factor in the case of two Assembly Republicans (Assemblywoman Alison McHose and Assemblyman Michael Patrick Carroll) means Democrats may need to summon two more votes.

Coutinho urged the pair of GOP renegades to vote yes.

“I don’t think the Democratic Party will offer more votes,” he said. “The governor has to hold up his end of the bargain. This is a really difficult budget. If I can vote for this budget, this is zero reason for any Republican not to vote for this budget. They have to do some soul-searching.”

They aren’t the only ones.

Spencer said she’s also considered the South Ward ramifications of voting yes to the budget without the full $7.5 million restoration of family care. 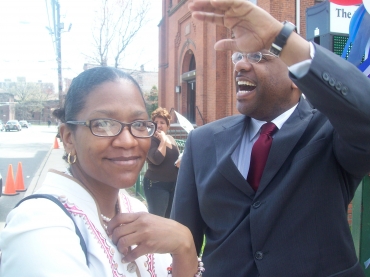