HAMILTON – Gov. Chris Christie selected this public service sector stronghold in which to flourish a pen and sign a 2 percent property tax cap bill into law as two 14th District contestants from opposing parties eagerly edged into the picture frame as they bear down on their November election clash.

“They’re running against each other,” said Christie, acknowledging the presence of state Sen. Tom Goodwin (R-Hamilton) and Assemblywoman Linda Greenstein (D-Plainsboro), who are running in a special election to fill the unexpired term of Bill Baroni.

Zapped by reporters with questions about the continuing and aggressive fundraising of the anti-public sector union, pro-Christie group, Reform Jersey Now, the governor said he was happy to have their retaliatory support.

“It’s up to them to comply with the law, beyond that, it’s up to them,” he said, addressing reports that the group run by his closest political allies is fudging on campaign finance rules that Christie champions.

Standing in public sector central, he took a crack at the ad campaign money spent against him by public sector unions, and said he welcomed relief from “getting hit by an $8 million two by four.”

But in the meantime, he intends to fight back.

Oliver also didn’t attend the initial Saturday press conference a week and a half ago in which Christie and Sweeney announced the agreement.

Depsite her absence, and the absence of Senate Majority Leader Barbara Buono (D-Metuchen), Christie used the occasion and Sweeney’s alliance and presence in particular to trumpet a new day in New Jersey.

Giving a podium wink to Mayor John Bencivengo and identifying the mayor as a cherished Jersey character with an edge, who typifies the residents of this old factory landscape peppered with firefighter and blue collar barbecue culture, Christie went to national headlines to soak up the praise of pundits observing his gubernatorial efforts.

“Thanks to Senate President Sweeney for being willing to stand up for the taxpayers of the state.”

Christie admitted he would have preferred to secure a constitutional cap, and still favors it to what he signed today, but basked in the statutory cap as the starting point for “real property tax relief.”

“It’s about compromise as long as you don’t compromise the core principles that underlie your proposals,” said Christie in a nod to part of Sweeney’s contribution to the agreement: a rejection of the voter approval portion of the cap originally prized by Christie.

Branded by members of his caucus as too quick to concede to Christie’s terms, Sweeney was careful to observe that he had many differences with the Republican governor, before concluding that “all of the people in the State of New Jersey are winners today.”

A friend and confidante of the governor’s, Kyrillos added of the cap, “The political establishment will be forced to make the hard decisions they’d wished they had made all along.”

After the snapshots and smiling stationary poses with the governor were over, the GOP and Democratic Party political handlers split into their separate camps, headed for the exits and their mutual 14th District war rooms.

“After a decade of inaction and excuses, legislators have finally listened to the people and began to make real progress toward permanent property tax relief,” proclaimed the senator. “With Cap 2.0, New Jersey families will have real control when it comes to their property tax bill.

“This strong cap represents a key part of my commitment to make New Jersey affordable again without compromising public safety or essential government services. The tough work is not finished, but in only a few months we have changed the culture in Trenton to end the special interests grip on power and restore it back to the people. Trenton’s status quo has failed New Jersey taxpayers for too long. I pledge to continue to work to bring real reform to the taxpayers.”

Greenstein answered with a recollection of Democrats’ efforts to secure a 4 percent cap, which drove the average statewide annual tax uptick to 3.3%.

“I obviously voted for it,” the Democratic challenger said of the 2 percent cap. “I’m in favor of anything that reduces property taxes. It’s building on what we’ve done for the past few years.” 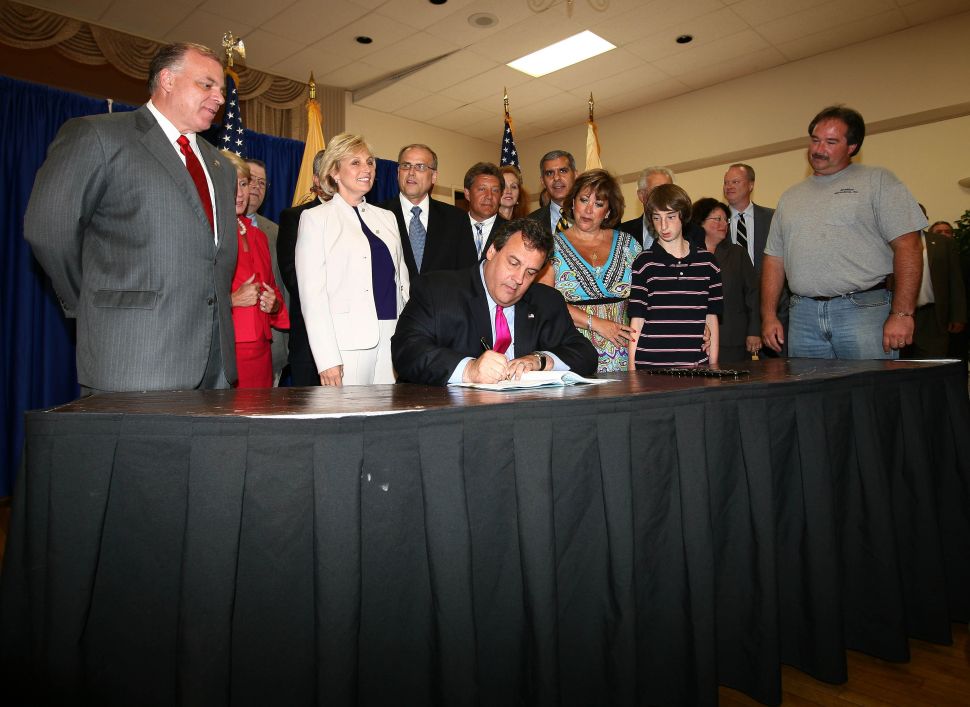