The act of sitting in a hearing room on a Friday without the ability to engage a key member of the administration enraged Budget Committee Democrats.

“Any reasonable person would feel insulted by what is going on here,” said Assemblyman Albert Coutinho (D-Newark). “The governor has used his legal authority to call the legislature in yet administrators critical to the process aren’t available. There is no excuse for Commissioner Schundler not to be available to the budget committee.

“What are we doing here?”

Grifa went to the budget hearing room at the request of Assemblyman Lou Greenwald (D-Voorhees), who fired off a letter to the governor’s office yesterday demanding expert testimony from the Christie administration in response to Christie demanding legislative action.

In addition to being dismayed over the absence of Schundler, Coutinho described as wholly inadequate tesitmony provided to the committee by the administration.

“No one from the division of pensions and benefits was available to the committee,” Coutinho griped. “Commisisoner Grifa’s testimony raised more questions than it answered.”

“Democrats seem to have accepted that 12-15 hours notice to appear was pushing it,” he said. “Grifa was great and handled all their questions well. They don’t get the concept.”

Called for comment, Drewniak said, “Senate President Sweeney’s 2.9% cap traveled through the committee process at warp speed and Democrats did not ask for any input from the executive branch.

“We determined last night (after receiving the letter from Greenwald) that Lori Grifa would be the most appropriate person to respond to all of the committee’s inquiries,” the spokesman added. “Her department is most infused with the issue.” 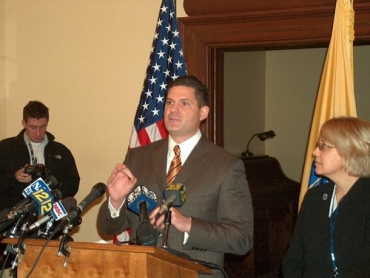