After morning wrangling between sponsor Sen. Mike Doherty (R-Washington Twp.) and Senate Majority Leader Barbara Buono (D-Metuchen) over one in a series of property tax reform “toolkit” bills, state Senate Budget Committee Chairman Paul Sarlo ruled that S. 2012 be held until senators tweak it into something a majority can accept.

According to the summary, the bill allows gross income tax refunds to be credited against a taxpayer’s delinquent local property taxes in the same manner as is currently allowed for homestead property tax rebates and credits claimed by delinquent property tax taxpayers.

Buono worried that the bill did not specifically require that child support debt take precedence over all other debt payment, including homestead rebates.

Her initial criticism, followed by Sarlo’s concurrence, caused Doherty to sense the Democrats tag-teaming, and he quickly charged the pair with trying to “score political points.”

“Nobody’s trying to score political points,” said the chairman. “There was a concern about child support.”

Buono backed him up.

“It is clear on its face that (in the bill), property tax debt takes precedence over child support debt,” said the majority leader.

Doherty suggested that Sarlo has his cellphone, and why didn’t he call and tell him there was trouble with the bill’s language rather than attempting to embarass him.

“This is not a political issue,” said Buono. “It’s a serious issue that needs to be addressed.”

Sarlo called back Hunterdon County Freeholder/Frenchtown Mayor Ronald Sworen, and asked him if he would like to see child support take precedence over all other debt.

“I would like to see child support go first,” admitted the mayor.

Doherty said he was ready to amend the bill, but still objected to what he assessed as Democratic Party political tactics to kill the bill.

“I waited in that room for two hours and I would have appreciated you telling me about your concerns,” said the GOP senator, referring to the meeting’s delay. “If you had some questions… I could have been working on this.”

Doherty’s prime sponsored bill was one of five the committee intended to consider on Monday, Sarlo told the audience as he launched the hearing.

The senate budget committee chairman explained that Gov. Chris Christie had laid out 33 property tax reform proposals he wants the legislature to pass as augmentation to his 2.0% tax cap, which the governor signed last week.

“There are 19 pieces of legislation still out there,” Sarlo said. “After today, there will be ten which have not yet been addressed.”

Caucusing this morning, Republicans fretted that they wouldn’t have the votes to get the bulk of the bills out of committee. Doherty knew something was afoot when he encountered Sworen in the hallway outside the hearing room.

Sworen’s a Republican mayor from Doherty’s legislative district who happens to be on the opposing side of a longtime intra-party fight Doherty waged with the establishment forces of Hunterdon County. The fact that Sworen spoke out in opposition to one portion of his bill, reinforced Doherty’s hunch that Sarlo and the Dems were bumrushing him.

Circling a passage of the bill buried under a lot of other legalese – “Child support indebtedness shall take precedence over all indebtedness” and noting that that same language is in the current law, which Democrats never complaned about, Doherty dug in against the Dems.

“If this is the way business is done in our state, no wonder the state is falling apart,” he told PolitickerNJ.com.

Sworen later said he wasn’t opposed to the bill; in fact he approves. But he conceded the one passage identified by the Democrats could be improved. 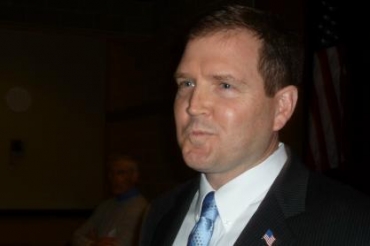