NEWARK – Bedlam ensued by slow degrees tonight at Bethany Baptist Church as Mayor Cory Booker outlined a plan to lease the city’s infrastructure and met the scorn of an entrenched opposition.

“We believe our MUA (municipal utilities authority) and other austerity measures will help us get through this time,” argued the mayor, hours after a mostly skeptical city council again voted to defer the matter.

The second of Booker’s five ward whistle tour to discuss his MUA, designed to plug a $70 million budget hole this year and take chops at the budget in the years ahead, this Central Ward venue featured the front-of-the-room presence of new Central Ward Councilman Darrin Sharif.

Sharif had observed last night’s West Ward fiasco and vowed to rule his hearing with a stronger hand. The Rev. Bill Howard tried to help early when he reminded residents packed into the basement gym, “Glad to have you in the church.”

Howard lingered on that last word, but if the early part of the community meeting produced little ugliness, the session spiraled into catcalls and raspberries by the end.

“No MUA! No MUA!” a handful of protesters repeated, prompting others to take up the chant. Revisiting the ward where he once served as councilman, where Charlie Bell served with his blessing before getting upended by Sharif in a June runoff, the mayor sat at the front of the big room under a basketball net alongside Council President Donald Payne, Jr., Sharif and other members of the governing body.

He silently weathered the blows, with his precision arguments on the viability of the MUA never overcoming a combination of dug-in opposition and a hearty residents’ horse sense that the MUA could throw the city into longterm debt and saddle future generations.

Booker insisted the authority would be a public utility.

“I was opposed to privatization ten years ago, and I am opposed to it today,” he said. “We would not be selling one piece of our asset.”

But it didn’t stick in a whirlwind of counter protests from residents who felt the mayor had kept the details of the MUA hidden while he ran for re-election, trusting he would have the necessary votes once he got through, and not what to his team is a new obstinate duo in the form of Baraka and Sharif.

Residents kept reading the MUA as privatization of the city’s .

“You ran on a platform of change,” Sheila Pitts told Booker. “Yet you bring in these old and antiquated ideas and tell us that’s change!”

Sharif and Payne at times appeared to be auditioning for mayor, with the rangy Central Ward newcomer trying on several occasions to quell the crowd, a strategy that provoked Payne to repeatedly come out of his chair in search of exerting a more seasoned presence on the unraveling affair.

In the midst of explaining his plan, Booker several times stopped and asked for the intervention of Sharif, who rose only to be crowded by the council president.

The fury for Payne behind the scenes in the Booker camp never spilled out into the open here tonight, but Booker allies hopeful of landing the MUA deal thought they could count on the council president’s aye vote. After all, he had run as a member of the Booker Team.

But the hard no votes of Baraka and Sharif on the MUA coupled with the citywide presumption that Booker won’t pursue a third term has triggered a four-year contest to succeed Booker. Every gesture among the quietly jockeying councilmen carries with it suggestions of future power.

As if to underscore the political urgency of the issue, “Councilmen, if you think that you can vote for this (the MUA) and we will vote for you, you’ve got another thing coming,” Annette Alston told Payne and company, setting off a chorus of whoops.

Another resident, Joanne Simms from the People’s Organization for Progress, prompted a wave of hand claps when she criticized Booker’s MUA plan as a payday for lawyers and consultants at a time when the city needs more police and firefighters.

Proponents of the mayor’s plan were shouted down as charlatans. When one men started down a worn path about his kids and the MUA as an alternative to higher city taxes, someone shrieked a sexual epithet at him.

“I will not tolerate residents being abused in the manner that just happened,” said the council president. “Especially in a church. That last outburst was uncalled for. If anyone makes an outburst like that again, you will be removed.”

The statement won some applause, but as Booker hunkered in for the next close range dress down and an anti-MUA sign shot up in front of Booker Chief of Staff Mo Butler to block his view, a voice behind another protest sign could already be heard.

“I can’t wait for the South Ward hearing on Thursday night – that is going to be pannnnnnndemonium!”

Then a big cheer went up from the crowd.

State Sen. Ronald L. Rice (D-Newark) took a long, ambling, I-told-you-so walk to the empty microphone at the front of the room where his old nemesis waited on the other side of an unceremoniously covered picnic table.

The Booker Team has repeatedly argued that the council would have rein over the authority, but Rice, with the state statute apparently in his hand, challenged that, arguing, “Once they appoint the commissioners, they give up their authority.”

“School him, Ron,” someone screamed.

Cops – at least two in blue and one in street clothes with a gun on his hip – prowled the crowd, eyeballed the upstarts, intervened when necessary.

Booker sat at the front of the room, speechless during the public comment portion, under yet another angry onslaught.

Students circulating the room with sandwich board-sized signs proclaiming their support for the MUA finally provided little counterweight on behalf of the mayor.

Richard Whitten, formerly an administration employee who went sour on Booker, ran against the machine in May, then emerged as a leading backer of Sharif before making the new councilman’s payroll, spied a cluster of young MUA backers and asked them, “Why?”

“We need to privatize our for money,” attempted one.

That was too easy for Whitten.

The mayor had made the argument as forcefully as he could all night that if people should take one thing away from this – the MUA wasn’t privatization. Now Booker’s would-be apologists gaped as Whitten devoured them in argument. 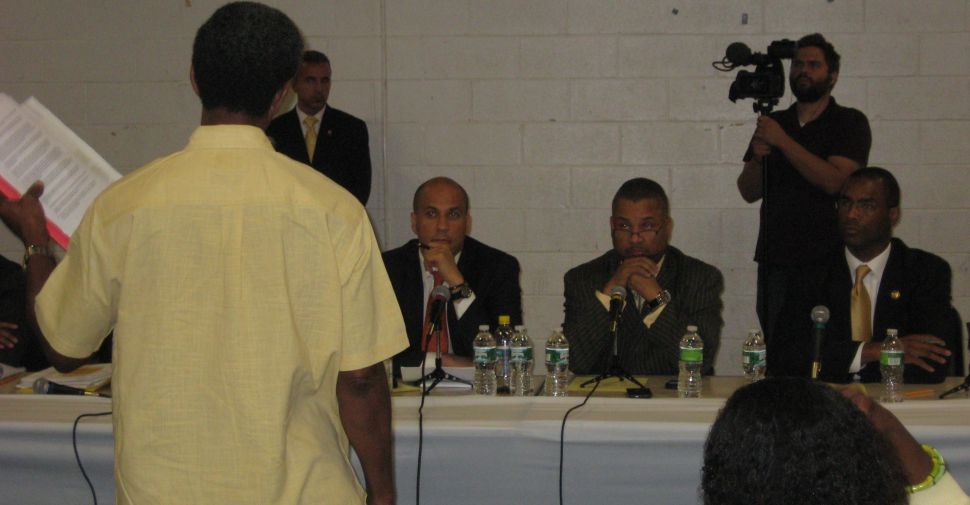