NEWARK – He doesn’t hear it.

He doesn’t have to hear it.

A searing, disapproving whistle blows on Broad Street in his direction, and inside City Hall, Mayor Cory Booker grins at a prospective headline: “Booker Implosion,” but refuses to abide any storyline that puts him in less than fighting shape in a crisis.

Statewide his fans (and rivals) in the Democratic Party establishment shuddered at the mayor’s endorsement of Gov. Chris Christie’s 2.5% constitutional property tax cap as evidence of Booker’s submission to the new Republican governor and incapacity to rise as a statewide counter-force to Christie.

“I’m not thinking about the political scene statewide right now,” he says, waving off the criticism that he’s shrunk in the Christie era. “That’s inside baseball, political establishment stuff that has absolutely no bearing on what we’re doing here.”

That may be true – relative to what he confronts here on the ground; for Booker doesn’t need to be questioned on his other political challenges. They’re inescapably present, requiring no introduction, and making the Liuna labor rally across the street demanding local union labor for all city jobs – but a small part of a part.

“The city’s expenditures are outpacing its revenues,” the mayor admits, his every word and facial expression still faithfully chronicled by the crew of an award-winning cable television show.

Whatever the Democratic Party’s statewide ailments, Booker’s largest political agony right now is local, as the city council cut out on him dramatically by a 5-4 vote earlier this month when they opposed his plan to lease the city’s waterworks as a long-term revenue generator and short-term $70 million budget plug.

It amounted to bad news compounded by bad news, for the mayor’s municipal utilities authority (MUA) proposal is tied to a bad-year budget that would hike taxes seven percent, and lay off 620 non-uniformed workers.

Even he gets a budget, even if he gets the MUA – which the mayor still privately hopes will cohere as a budget fix in the mind of at least one more council member to bring the vote to 5-4 in favor of the MUA on July 27th, the political pain will not subside.

Ginned up by what they see as the downfall of a media star struck, lame duck mayor who didn’t go public with the dimensions of the budget crisis until after his re-election, the council sees a political opportunity here to finally get out from under Booker and prepare for the post-Booker era of Newark.

“Elections have consequences,” groans a front office ally, referring specifically to Baraka and Central Ward Councilman Darrin Sharif, whose victories respectively in this year’s elections opened the doors of dissent on a governing body that Booker owned over the course of his first term.

Baraka and Sharif defined their candidacies in opposition to Booker, the same way former Central Ward Councilman Charles Bell did in 2008. The consequence of Bell teaming up with Booker once on the inside of City Hall was Sharif beating him in June. Lesson: once on the inside, if you crave political survival, continue opposing the mayor.

Sharif in particular wants to make the fault line evident.

His father was a core political advisor; his brother once won a big money communications contract from the city under Booker before business relations between the mayor and the Sharif family turned sour. Now – in lieu of getting cut out of the mayor’s inner contract sanctum – the younger Sharif wants convincing enough cred as a street-level, taxpayer champion.

Then there are longtime establishment electeds like Council President Donald Payne Jr and Councilman Luis Quintana.

They – or their families, like the Sharifs and Barakas – were here before Booker was here, and they will be here presumably when he’s gone, or so the logic runs.

They have to be careful of defining themselves as Booker apologists. At risk of getting outshone by naysayers Sharif and Baraka, Payne shocked Booker’s allies when he voted “no” on the MUA.

Even the mayor’s grudging governing body backers arguably support his controversial budget fix apparently out of no urgent belief in the intrinsic value of the MUA or Booker’s leadership, sources say. Speculation is that with one eye on the professional profile of counsel and Scarinci Hollenbeck legal star Ramon Rivera, North Ward Councilman Anibal Ramos – a potential 2014 mayoral candidate – gambled with an “aye” vote on the MUA.

Taking the other council members at their word in their entrenched opposition to the MUA, Booker lays out his alternatives, which include cutting non-uniformed city personnel to a four-day work week and reducing their salaries by 20%.

The council would still need to come up with an additional $50 to $60 million to account for the loss in the budget represented by the MUA lease, the mayor says. “One thing I won’t do is stand for a double digit tax increase on the residents,” he maintains.

With he and his allies still hopeful of peeling away a vote in favor of the MUA, Booker’s public game of chicken with the governing body – “I welcome the council to join us in the furlough plan” – puts them now in the position of potentially backing tax increases well above the seven percent Booker feels is the most he can demand of homeowners.

“It’s in the council’s power now to figure out,” Booker says cheerily.

In return, the council says it’s his responsibility.

The mayor’s allies remain determined to find one more vote before July 27th and the deadline for the MUA deal to have any impact on this year’s budget crisis.

They think they can do it.

But if they can, if he can, the crisis won’t be over for the mayor, who would nonetheless pull – even if only briefly and still in a direction at odds with the power perception globally – out of a flailing, downward spiral locally. 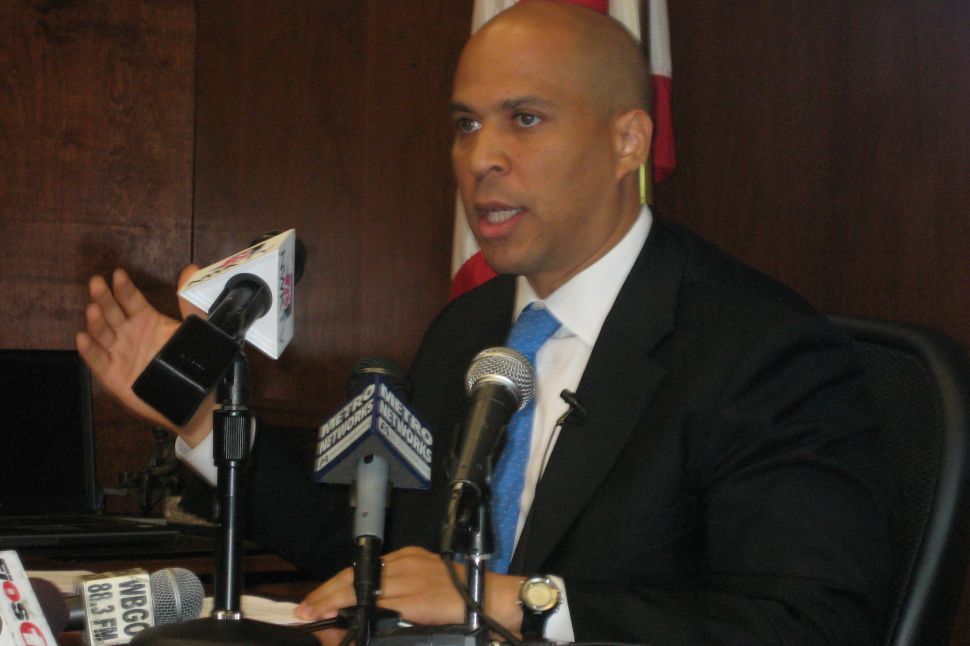