A comment by Department of Community Affairs Commissioner Lori Grifa at today’s Budget hearing sent Democrats on the warpath and Republicans into incredulity.

According to Democrats, when asked to compare New Jersey and Massachusetts, the DCA commissioner said the Bay State was “whiter” and less educated.

“Since when did Massachusetts being ‘white’ than New Jersey matter in the discussion of a 2.5 percent property tax cap?” Spencer wondered. “Ask Department of Community Affairs Lori Grifa for an answer. Because I have no idea what the relevance could possibly be.

A property tax cap is being considered for the benefit of all property taxpayers in New Jersey, regardless of whether they’re black or white. For Commissioner Grifa to interject race in this discussion was inappropriate and unnecessary, and shows a lack of understadnign of the issues at hand.”

A spokeswoman for the DCA did not immediately return a call to clarify the comment.

Grifa’s comment prompted Assemblyman Gary Schaer (D-Passaic) to request clarification. Grifa assented that she had referred to Massachussets as “whiter” than New Jersey in a demographic context.

“Her reference was dealing with demographic issues,” O’Scanlon said. “PLease tell me no one is trying to paint her – or the administration – as racist.” 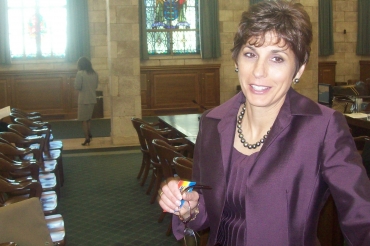