State Sen. Joe Kyrillos (R-Middletown) was at the Statehouse this morning presenting testimony in favor of his toolkit property tax reform bill, S-2173, which would set a uniform limit on the cash payment for public employees’ unused sick and vacation leave.

The Senate Budget Committee did not intend to vote on the bill today, which would restrict to $15,000 the payment of supplemental compensation at retirement for accumulated sick leave for “current and future officers and employees of boards of education and local governments.” The bill would also limit the carrying forward of vacation leave to just one year.

“This past spring, the legislature enacted several pension and benefit reform bills,” Kyrillos said in written tesimony, which he gave to PolitickerNJcom.

“One of those bills, S-4, put limits on vacation and sick leave in place for all new local, county and school district employees. It was a good idea that received strong bipartisan support. Now it is time to expand it to include employees that were hired prior to that bill’s effective date.”

Kyrillos cited egregious examples of unused sick time resulting in public sector “jackpots,” including $132,000 for the Freehold High School superintendent; $172,000 for a retiring Avalon police chief; $184,000 of accrued vacation and sick time for a Keansburg super; and $8 million in accumulated leave costs in Atlantic City in 2006.

“These unacceptable payouts cannot continue,” said Kyrillos. “New Jersey taxpayers cannot afford it. They represent a major reason why property taxes have continued to rise year, after year, after year. We need to take a balanced approach by capping retirement packages.” 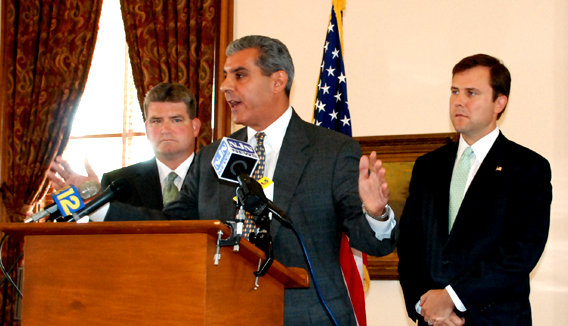