The caucus meeting from earlier in the day had not gone well, and the Democratic Party lawmakers wanted to try to assert themselves to salvage a situation run amok. They wanted to diplomatically feel out O’Dowd on the governor’s receptivity to some additional provisions that kept coming back to them, both in the caucus and in the hearing.

These provisions included state aid relief from the proposed property tax cap, and an exemption for special education. Their best case scenario would be a negotiated change to the statutory cap bill McKeon initially sponsored, which the governor yesterday conditionally vetoed. The senators could tweak it a bit, couldn’t they?

But if that didn’t work – and it probably wouldn’t given Christie’s overwhelming position of strength on the cap question, they floated to O’Dowd – and here they treaded on very soft political ground, admittedly, but felt they had to start somewhere – could they get the governor’s commitment going forward that Christie wouldn’t wield his veto pen if McKeon and Burzichelli legislated some future changes in those areas already mentioned?

The governor wouldn’t stand for any more exemptions. At a certain point tacking things on like that would weaken the bill into oblivion.

But he would check on the commitment to future legislation. While they remained in dialogue with the front office, the assembly wouldn’t consider the amended cap provision on the floor until – earliest – Monday.

No, it wasn’t a lot; and no, it wasn’t tough-fibered maybe, but McKeon and Burzichelli felt better than they had before the meeting.

And better than they had felt after the caucus meeting from earlier in the day.

“Ugly” was a word selected by two different sources to characterize the array of hurt feelings and anger expressed by lower house Democrats irritated at being left out of a property tax deal cut by Christie and Senate President Steve Sweeney (D-West Deptford).

The thought was that if Sweeney was getting worked over by the governor, at least he was present and accounted for, while Assembly Speaker Sheila Oliver (D-East Orange) was not a player, which meant the governing body was not a collection of players.

Most South Jersey Democrats in the caucus did not number among those feeling disenfranchised. Assemblyman Paul Moriarty (D-Washington Twp.) had authored bills containing many of Christie’s toolkit provisions. Assemblyman Lou Greenwald (D-Voorhees) had endorsed the 2.0% cap before it was fashionable.

“I’m tired of chasing,” Greenwald told allies in reference to the governor. “Let him chase me for a change.”

A few days later, Christie had backed off of his initial 2.5% constitutional hard cap and endorsed a statutory cap. Two days after that, the governor and Sweeney embraced on a 2.0% cap.

Greenwald beamed behind the scenes.

McKeon proved a diplomat in the caucus room, and a public apologist for Oliver – a gallant role not without an undercurrent of self-interest for a politician who – if he doesn’t play it right – could easily wind up roadkill in 2011.

The assemblyman sits in District 27, presumably ground zero next year in a Democratic Primary. If he runs again, the chief object of the Democratic Party boss’ ire will be Sen. Richard Codey (D-Roseland), the former governor who ran afoul of South Jersey and Essex County Executive Joe DiVincenzo and finally bore the resulting payback last year when they tossed him from the senate presidency.

But whether or not redistricting in March of next year chops Codey out of his Essex-based district and sets him adrift in a Morris (Republican) district, McKeon could be collateral damage.

So his defense of Oliver – a key DiVincenzo ally – on the cap question bore with it the double urgency of political self-preservation.

There’s always the potential too – in the case of Oliver getting dumped a la Freddy Caraballo – of a dispossessed McKeon, Codey and Oliver strengthening a renegade West Essex alliance against the party machine.

But for the moment, it was just McKeon the captivating back chamber orator.

“This is a statutory soft cap,” the assemblyman told the more resistant members of the caucus. “The governor acceeded to what we came up with three years ago.”

Even the surliest members grudgingly paid attention as McKeon summarized.

“Instead of being negative, let’s be positive about it,” said the former West Orange mayor. “Speaker Oliver on Saturday could have sat and declared her views and signed onto the cap at 12 noon on Saturday, or whenever it was. But she didn’t. She did the right thing by consulting her caucus.”

Nothwithstanding the McKeon moment, caucus members concluded their session with the lurking sinking sensation of no ground gained. Several members backed up their chairs convinced nothing of consequence had just occurred as Oliver released a statement in short order endorsing the senate/Christie cap agreement.

Burzichelli and McKeon huddled up with Bill Caruso, the executive director of the Assembly Majority Office.

They had to try to make something happen.

So they went to see O’Dowd. 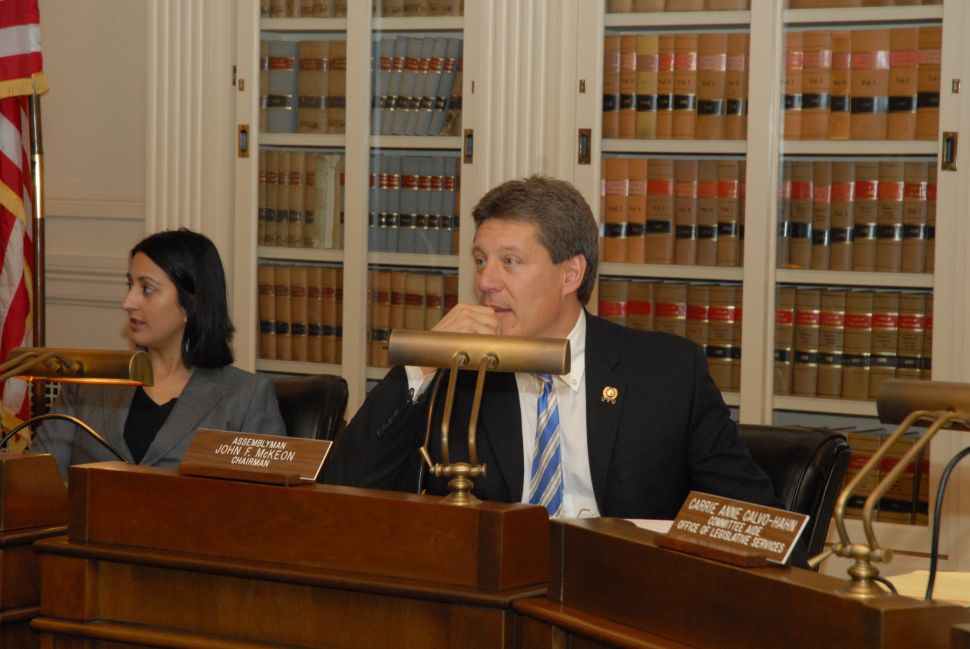