TRENTON – Sadistic onlookers prayed for a conflagration between the two groups as marriage equality activists huddled with reporters inside the Statehouse and one man-one woman proponents dominated the entrance to the Capitol building.

But it didn’t happen, at least as of 12:45 p.m., as Brian S. Brown, president of the National Organization for Marriage, anchored his “Summer for Marriage 2010” tour at the podium, kicking off a cavalcade of speakers that included the Bishop of Trenton.

Brown’s RV roared in from Providence Rhode Island where yesterday there some trouble, according to the organization president.

“They tried to storm the stage,” he said of marriage equality activists. “They scared our supporters.”

Buttressed by a crowd of about 80 people, including rabbis from the Torah Jews for Decency campaign, Catholic Bishop John Smith and white tux-clad Knights of Columbus flanking the speakers, Brown celebrated the New Jersey senate’s nay vote last year on marriage equality.

“Marriage is under direct threat,” he said. “The senate voted against same-sex marriage by an overwhelming margin. The senate listened to the people.”

Whoops sounded from an audience that moments earlier had consumed the amped up rhythms of Lee Greenwood flooding the sidewalk outside the Statehouse.

“Voters have said we know what marriage is and we want it protected,” added Brown, who also noted the importance of curtailing “activist” judges.” 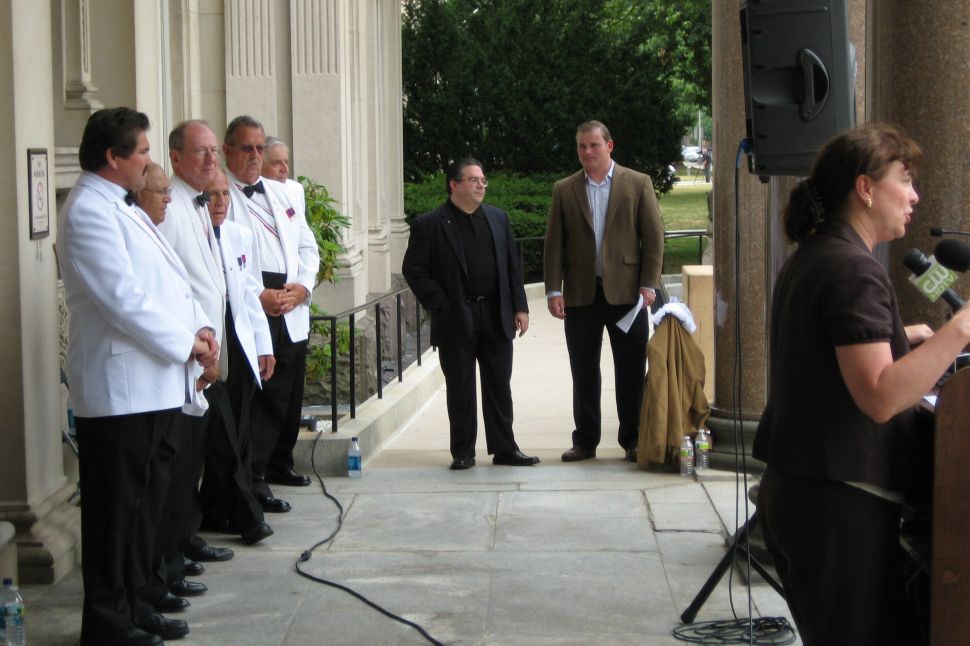