NEWARK – No one ever expected opposition councilmen Darrin Sharif and Ras Baraka to come into office with a lip lock on Mayor Cory Booker’s policies, but the defection of former Council President Mildred Crump sent a shock wave through the city’s political system this month.

There’s a back story gnawing at the mayor’s troubled efforts to advance a municipal utilities authority (MUA).

Crump said she hoped Mayor Cory Booker would have helped her hold onto the top chair on the governing body, but, in Crump’s words, the mayor “actually lobbied against me.”

Now Booker craves votes for the MUA to help plug a $70 million budget, and old pal Crump is MIA.

“I don’t foresee my changing until I see some solid alternatives,” said the lone woman on the council, one of a block of five council people opposed to Booker’s creation of the utilities authority.

The vote is tomorrow, scheduled amid a weeklong series of public forums on the proposal. Central to the drama stands the wilted relationship of City Hall matriarch Crump and Booker, whom the councilwoman says needs a “wider circle of people advising him – people with opposing opinions.”

“I’m in a business where anyone can make a mistake,” the councilwoman told PolitickerNJ.com. “But to dig his heels in like this is causing some surprise. The lack of willingness to enter into a discussion is alarming.”

Crump said the MUA isn’t her only worry when it comes to the mayor’s policies. She also said she doesn’t expect to support Police Director Garry McCarthy when Booker’s top cop is expected to go before the governing body for reupping next month.

“If I were a betting person, the odds are not great,” said the councilwoman.

A day before the governing body is scheduled to size up the MUA, Quintana also told PolitickerNJ.com that he has no intention of voting in the affirmative. 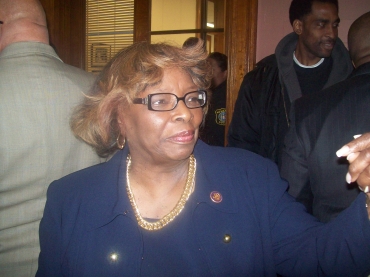