NEWARK – Onlookers convinced Mayor Cory Booker would get the city’s most animated earful in the South Ward instead witnessed a relatively subdued slam of his proposed municipal utilities authority (MUA) tonight when Booker traveled to that fifth of the city where he has traditionally been weakest.

South Ward Councilman Ras Baraka led the council opposition to the MUA idea, and his street past of uprisngs coupled with Booker’s history down here had some thinking molotov cocktail choreography, courtesy of Baraka, on their way into the auditorium in George Washington Carver Elementary School.

At some point, surely someone would at least smuggle Baraka’s bullhorn into his hands onstage.

But it never happened.

“People have been preparing for the worst meeting and we’re going to show them it’s the best meeting,” Baraka told the nearly capacity crowd.

A plain clothes cop with a holstered Glock in his belt, said to a sergeant by way of comparison to meetings in the West, Central and North wards, “This is the best by far.”

That’s not to say it wasn’t animated. It just wasn’t the anticipated all hell breaking loose.

Booker tried to sell his water lease plan. Even with the creation of a water authority to plug a $70 million city budget gap,  the mayor would still have to lay off 650 workers. Without the authority, Newark faces a much worse crisis.

So far, a resistant majority on the city council has not submitted a coherent alternative. With no convincing love for MUA in the crowd this evening in the South Ward or elsewhere, they intend to meet with Booker tomorrow to discuss other options.

Sworn into office at the beginning of the month, Baraka admitted he feels uncomfortable voting for the MUA without time to review it in full.

“The council is being pressured to act in two days on something we have known about for four years (a budget crisis which the admistration nonetheless did not acknowledge in any detail until after the mayoral election),” Baraka said.

Booker defended the MUA plan as an alternative to hiking taxes above the seven percent figure he offers in his currently proposed budget.

“We are elected by the voters to cause the least amount of pain to our residents,” he argued.

His allies made their best case for him. Denise Cole announced herself as a retired captain, U.S. Military, before lacing into Baraka.

“You will be assessed in the face of adversity,” she said, evidently making the point that it’s easy for the South Ward councilman to criticize without offering his own xs and os budget strategy.

People liked the attitude early but when they realized she was plugging Booker, the boos rained.

Wielding a roll of toilet paper in scornful acknowledgement of a City Hall item Booker said he would be forced to cut, former Councilwoman Bessie Walker made a sudden move toward the stage where the mayor sat only to be intercepted by a Nation of Islam security guard, who accepted her donation on Booker’s behalf.

“I don’t care about them, they were paid to boo me,” the former councilwoman added in reference to the Booker apologists who dotted the audience.

Deprived of a platform during the muncipal elections when the mayor smothered them with a $9 million campaign, hard luck candidates Carole Graves and John Sharpe James resurfaced at the microphone tonight.

“We’re being pitched an MUA at the 12th hour,” said James.

“You never come out here to any of the neighborhoods except to sell your snake oil,” Graves told Booker. “This MUA is the biggest boondoogle for lawyers and consultants and New York people who don’t live in Newark.”

Booker and Baraka sparred on at least one occasion, and seemed to enjoy the back and forth with the audience rising to the first real debate on the issue, when Payne, seated between the two of them, broke up the impromptu debate and suggested that the people wanted a chance to speak. 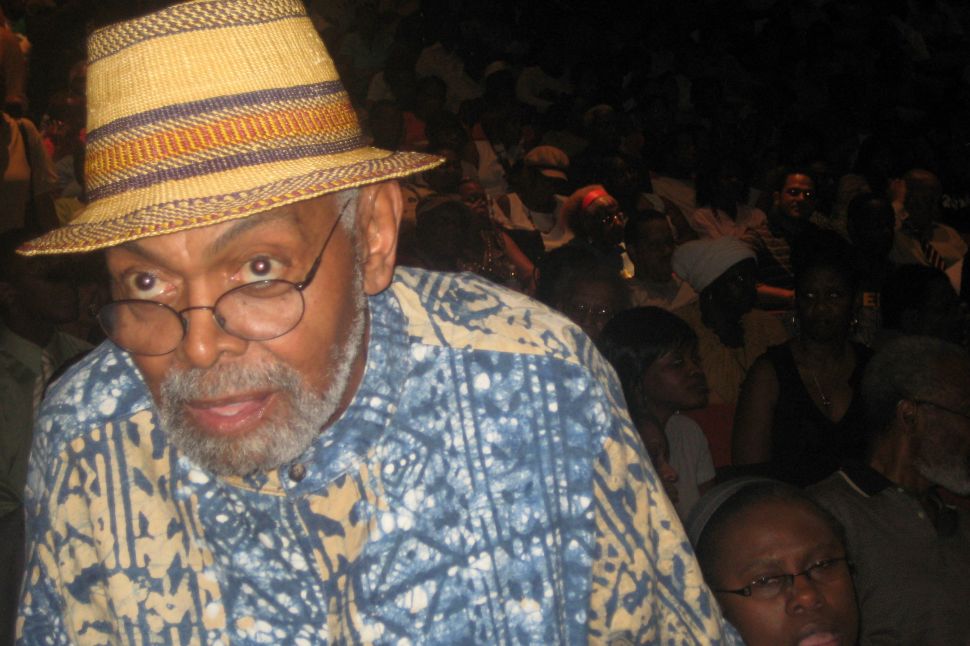