Contender status is the second of three tiers in the program as Young Guns forces the challengers to meet benchmarks in order to qualify for more aid from the NRCC.

Runyan is challenging incumbent Democrat John adler in the 3rd District, while Sipprelle is taking on Democrat Rush Holt in the 12th.  Both districts are considered competitive by the national party, with Runyan, a former lineman for the Philadelphia Eagles, thought to have the best chance of taking a seat.

Sipprelle has raised $829,000 and maintains $429,000 on hand as he strives to improve his name recognition.  Incumbent Holt has raised nearly $1.2 million and boasts just over $1 million remaining.

“These candidates have worked hard to meet the benchmarks set to place them on the road to victory,” said NRCC Chairman Pete Sessions (R-TX) in a statement. “With voters frustrated with an out-of-touch Democrat majority, these candidates are willing to take the necessary steps to achieve our goal of retiring Nancy Pelosi and winning and building a lasting Republican majority.”

The program is based on several criteria, according to a spokesman for the NRCC, including, fundraising, communications and new media.  candidates are given a time frame to achieve goals set for them by the committee and with each benchmark, they are moved up the ladder.

The young Guns program counts more than 100 member candidates, including 33 at the Contender level.  Another 50 are considered “On the Radar,” the first tier in the program. A total of 40 GOP candidates have reached Young Gun status, the final step on the ladder.

Ad for what it means to achieve each tier, the NRCC is reluctant to say.  Asked if candidates could count on additional funds from the committee, Northeast Press Secretary Tory Mazzola said the NRCC does not disclose its strategy.

Mazzola said only that following the Young Guns program would give each candidate the platform for a successful campaign.

“By moving through the proram the campaign is puitting together a winning strategy for election day,” Mazzola said.  “We use the program to make sure we have as many quality candidates in as many congressional districts as possible.”

Chris Russell, a consultant who handles both candidates, said unlike their opponents, the two candidates have the fiscally conservative message that voters are preapred to embrace in November.

“Both campaigns feel momentum is on their side and the energy level is sky high,” Russell said.

Of the eight Republican challengers in the state, only Sipprelle and Runyan are part of the program.

Democrats currently hold 255 seats in the House of Representatives compaed to 178 for the GOP (there are two vacant seats.) To date, the Democratic Congressional Campaign Committee has raised $93 million and maintains $33.7 million on hand.  The NRCC is lagging well behind, with $75.5 million raised and $17 million on hand. 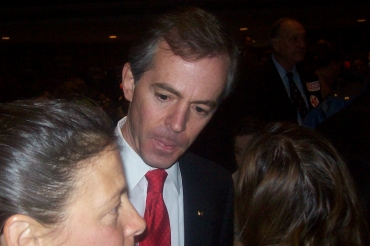