No-hoper Republican Congressional candidates at least have a chance in the coming weeks to unleash bottled up angst over the presence of poll-tested loser U.S. Speaker of the House Nancy Pelosi (D-San Francisco).

In this case, Paterson businessman Roland Straten reveled in the additional ammo as he chastised U.S. Rep. Bill Pascrell (D-Paterson) and the speaker amid reports of Pascrell’s and Pelosi’s tag-time take down of a White House staffer.

White House Spokesman Robert Gibbs had admitted publicly that “there is no doubt there are enough seats in play… that could cause Republicans to gain control” of the House of Representatives.

That prompted Pascrell and Pelosi’s rebuke, which in turn caused Straten to pounce.

“On Meet the Press this Sunday, the White House spokesman acknowledged what most people already know: that because of broad dissatisfaction with the policies of Bill Pascrell, Nancy Pelosi and this Congress, there is going to be a huge backlash this November,” said the 8th District challenger, who was CEO of Associated Fire Protection in Paterson for 40 years.

“That backlash is going to make districts once considered safe for Democrats very competitive and Republicans definitely have a chance to take back the House of Representatives.”
Straten strengthened the subliminal linkage.
“Instead of being upset with the White House for telling the truth, Bill Pascrell and Nancy Pelosi should consider what has caused the backlash in the first place- the rejection by the majority of Americans of their job-killing ‘tax, spend and borrow’ policies and their expansion of government into people’s lives and businesses.” 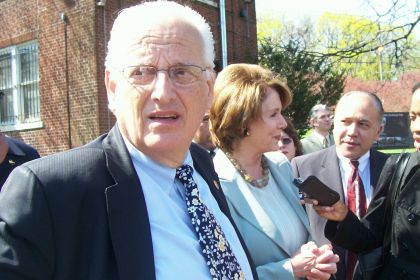