Sweeney’s board of all Democratic freeholders has been saddled with a court-ordered monitor because a judge ruled the board circumvented the Sunshine Law over 50 times in the past few years.

In a statement, county counsel Samuel J. Leone said the freeholder board disagrees with the court’s ruling.

“Over the past two plus years detractors of the Board of Freeholders have mounted more than 70 challenges against the County of Gloucester,” he wrote, “and all but one of those challenges was dismissed by the Courts.”

But according to the courts, the county clearly has a sunshine problem.

“It doesn’t matter whether he’s the senate president or the local street sweeper, you can’t violate the law,” Mark Cimino told PolitickerNJ today. Cimino is the attorney for David Burnett, a former county Republican committee director, who brought the lawsuit against the board.

The judge has asked the two sides to agree on a monitor who will ensure the board is complying with the Open Public Meeting Act.

That was, after Sweeney’s freeholder board tried to plant a county funded consultant and former judge as a compliance officer, Cimino said. The judge struck that down.

Cimino said the board made 1,602 votes in the period reviewed. Every vote was unanimous; no deliberations on the votes were ever made from the dais, the attorney said.

Sweeney has been on the board since 1997 and was elected director in 1998. His double-dipping began before a state law banned dual office holding, so he has been grandfathered in while both jobs are still intact.

Cimino accused the board of approving a dubious $20,000 workman’s comp payout to the county clerk, a political ally of Sweeney. The court invalidated the settlement, so the board just went back and approved it in open session. Cimino said no proof of injury has been provided. A wrestling match over lawsuit settlement documents is ongoing.

Republican Freeholder candidate Larry Wallace said in an e-mail to PolitickerNJ, “Everyone should ask the question: He doesn’t know how to follow the law? Can he read the law?”

“Their idea of the sunshine law is the complete opposite of what’s written and the spirit of the law,” Wallace wrote. “They seem to embrace the philosophy of ‘nothing should be done in the light of day’.”

Gloucester County Administrator Chad M. Bruner claimed innocence in his statement. “[O]ur books are open and our practices are in clear view for the public to see[…]We are confident that is why Judge Orlando denied seven out eight requested sanctions by the plaintiff and only partially awarded one item.” 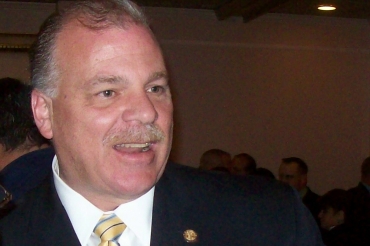