A task force examining an Essex-backed bill usurping county crime prosecution duties and throwing them to the state kicked off their study today.

Essex County Executive Joe DiVincenzo, a Democrat whose longtime friendship with Gov. Chris Christie has made him a cross-aisle favorite in Trenton, is a major proponent of the change and sits on the commission. The group is due to produce a comprehensive report to the governor by Dec. 15, DiVincenzo said.

Pushing for these transfer of duties for a decade, DiVincenzo told PolitickerNJ that he’s just glad someone finally listened.
Essex spends more than any other county on criminal prosecution, $49 million per year, he said.

Hudson County Prosecutor Edward DeFazio said that what makes sense for Essex, may not make sense for the rest of the other 20 counties. In fact, DeFazio said a trend outside of New Jersey has been to use the county government as a mechanism for economies of scale. In other words, regionalization of services can save money and provide effective and efficient service; doing so at the state-level may prove unwieldy though, DeFazio said. He is not part of the task force, although three other county prosecutors have been included.

“There’s strong feelings on both sides,” DiVincenzo admits, but, “Everybody is keeping an open mind.”

Turning over the reigns of these 21 regional offices costing a total of $475 million to the state wouldn’t simplify matters, DeFazio suspects.

“We have to be nimble,” he said, in acting fast to investigate all claims. The state, he admits, tends not to be nimble in such circumstances. “They have that luxury [to pick and choose which cases to prosecute], and rightfully so.”

But another facet of the issue seems to be money; not budgetary savings, although that plays a role, but who reaps the rewards of forfeiture funds confiscated from criminals.

Under the proposed bill being examined, the state would now pocket these cash windfalls that usually fund local policing initiatives. While Essex has a relatively low amount of forfeiture funds, Hudson County, for instance, takes in a couple of million dollars per year, DeFazio said. Which is one reason the N.J. State Association of Chiefs of Police has opposed moving the prosecutors’ offices to Trenton. Local police departments will lose funding, or would have to navigate 21 times the amount of red tape to put that money to use.

That said, DeFazio, like many of the task force members, is glad the issue is finally being thoroughly examined.

Two sources who spoke on background confirmed that county correctional facility operations cost significantly more money to run than the prosecutor’s office, and yet the consolidation of corrections at the state-level are not on the table.

One source believes political protection for county sheriffs is to blame; the other confirmed that high-ranking players in Trenton and elsewhere have financial ties to the corrections industry.

DiVincenzo said he is willing to tackle the corrections issue -his county spends $110 million per year on corrections and $50 million on the sheriff’s office- but first he is taking aim at the more manageable task of moving the prosecutors who already get their oversight from the state’s Attorney General’s Office. 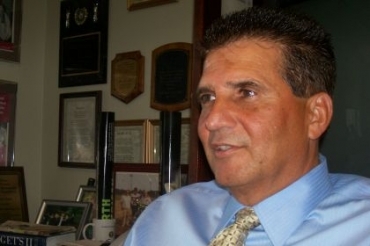