There is considerable ongoing speculation in Paterson about the 2011 future of the 35th Legislative District, where at least three factions try to gain traction heading toward next year’s primary.

But the emergence of former staffer Jeff Gardner as the disapproving local Democratic Committee chairman gives a focal point to suburban progressives eager to dethrone Girgenti after the senator’s no vote last year on marriage equality.

Sources say Gardner’s been talking to potential allies in the district’s epicenter: Paterson proper, where former Mayor Jose “Joey” Torres and Assemblywoman Nellie Pou could have urban cred to head an alternative ticket intent on taking out Girgenti.

Of course, that is if Pou can be persuaded to detach herself from Girgenti.

As motivated as Gardner’s forces are to fasten a brand name at the top of a ticket and potentially the second Latina in the state senate, Pou’s crashing flirtation with running for the upper house in 2002 comes back to the chief players as a painful reminder of the consequences of not waging an all-out insurgency.

Regardless of whether they can wrench Pou off the ticket to head an alternative slate, or whether they can prevail on Passaic County Democratic Party Chairman John Currie to jettison Girgenti in favor of Pou, the Gardner group still has a more lethal option: teaming up with newly crowned Paterson Mayor Jeff Jones.

Given the construct of the district, as much as suburban libs like the idea of themselves hammering out the stakes, Jones stands at the center of politics here now, and if he doesn’t decide to help bail out the veteran Girgenti, any viable alternative ticket will have to run through him.

The mayor simply told PolitickerNJ.com no comment when asked about the 35th district a few weeks ago, but it’s hard to picture the most powerful elected official in the county not wanting a close ally in the state senate.

This is the same upstart councilman who toyed with voting for Chris Christie as he considered the more decayed elements of the local Democratic Party.

Having helmed the Cinderella Story of the year, Sumter adds an additional slab of political muscle to her chances as the goddaughter of Currie.

The future of Assemblywoman Elease Evans (D-Paterson), meanwhile, is a question mark given the tricky political dynamics created by the emergence of Jones as mayor of Paterson after eight years of Torres, who looked like a lock for a third term; and the county committee victory by Gardner in his hometown.

If Jones improbably works with Girgenti and not Gardner, maybe they opt to keep Pou and replace Evans with Sumter. If Jones decides to buck Girgenti, maybe Sumter heads a ticket that includes Pou and Gardner.

Or maybe Jones – who disintegrated her City Hall job as assistant business administrator – mercifully promotes Pou to the top position.

Of course, the other factor is re-districting, which play even greater havoc with Girgenti’s designs on again playing at the top of the ticket.

Representing the GOP at the redistricting table, state Sen. Kevin O’Toole (R-Cedar Grove) could make a play to cut Hawthorne out of the 35th and put it in his own district, leaving Girgenti dangling on yet another outskirts scenario. Adding to the vet’s headaches, Girgenti was on the Dick Codey side of a senate presidency fight won by state Sen. Steve Sweeney (D-West Deptford), and probably would find no consoling embrace in the arms of South Jersey come primary time.

With an eye on statewide office, Sweeney could rehabilitate his image with the party and attempt a redemption story here too by ruthlessly undercutting Girgenti.

Chastised by Gardner and other progressives for his abstention on marriage equality, the senate president could conceivably appease the Blue Jersey wing of the party by throwing union and party muscle behind a ticket that includes Gardner, whose protestations might quickly be diffused by establishment acknowledgement.

Break it all down and the motivated and competing interests of many players sensing an opportunity for empowerment make Girgenti the man with his back most obviously up against the political wall. 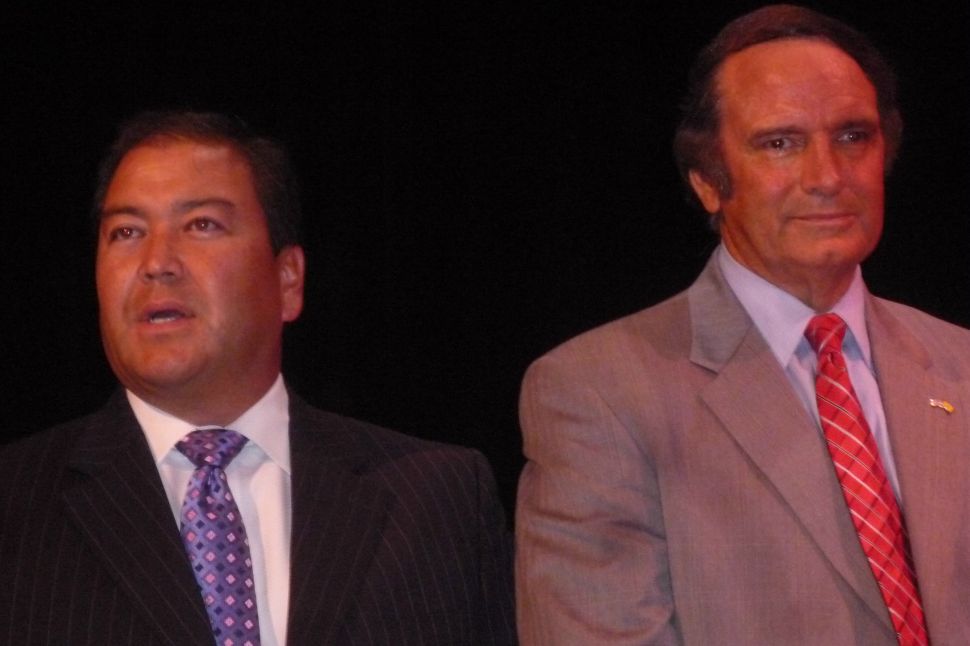