With a pivotal election in New Jersey’s most populous county, has Gov. Chris Christie torpedoed a prime opportunity for the GOP?

The Bergen County Executive race approaches and Democrats are rallying behind incumbent Dennis McNerney, and why not? The governor has supplied every bullet point for a campaign mailer bonanza: meddling with the sacrosanct Blue Laws, pitting the Meadowlands against Atlantic City, imposing the Film Tax, and recalibrating post-Abbott school funding. None of these played well in Bergen, to say the least.

Assembly Democrats denounced the Film Tax yesterday for chasing off “Law and Order: Special Victims Unit” that shot mainly in neighboring North Bergen and brought, according to the officials, $55 million in annual revenue to the area.

“The governor had no problem [this week] announcing that he was looking for extra money to create jobs, yet just a month ago, the state was so strapped for cash that he had to put 200 people out of work,” said Assemblyman Vincent Prieto (D-Hudson), who represents North Bergen.

Between now and November, the Dems will do their best to make the connection for the voters between Christie’s proposals and Kathleen Donovan, a four-term Bergen County clerk, who is making her third run at the executive seat.

She’s a socially liberal and economically conservative Republican who already has to lasso in Tea Partiers north of Route 4 to send McNerney packing.  Donovan will have a ready-made base after her recent endorsement by the New Jersey Laborers Union, which is 9,000 members strong and one of the most influential labor unions in the state.

All the while, Democratic operatives will resurrect “Chopper” Donovan radio clips that paint the GOP candidate as an extravagant spender. As Port Authority chairwoman, Donovan made use of the company helicopter more than some would have preferred in the early 1990s.

So the Bergen predicament is Donovan’s predicament to deal with; a Republican win could be a tipping point for a swing county that is leaning to the right.

Across the aisle, McNerney is dealing with some potentially damaging behavior at the Bergen County Improvement Authority borne from the alleged mortgage scheme of Chairman Ronald O’Malley. Worse yet, Republicans charge McNerney’s administration may have been complicit in the runaway development costs of Overpeck Park, the according to The Record. O’Malley has not yet been charged and the whole sordid affair could drag on for months upon months.

Donovan and her growing Republican cavalry in Bergen will tee off on every aspect of this investigation, like asserting that the investigator reviewing BCIA operations is biased because he was appointed by McNerney.

“The BCIA is a creature of Bergen County,” Donovan said in a press release this week. “In my opinion, it operates without appropriate oversight while controlling hundreds of millions of dollars of expense, revenue and guarantees through four separate budgets. It is a jigsaw puzzle that can only be solved through audits conducted by a thoroughly independent office.”

Instead of taking careful aim at Donovan, the Democrats will be forced to go on the defensive yet again.

And so it will go for McNerney and the Democrats, who -besides the deja vu of having another scandal to deal with- find themselves in another predicament.

Joseph Ferriero, a nonpareil among county Democrats, may not have to stand for another trial, according to one legal source, and could potentially return to the Bergen Dems seeking office again.

“It’s hard to underestimate what an effective leader Joe Ferriero was,” said one party insider this week. “[Without him], the Democrats would have had no chance in Bergen.”

But this time around, what would their chances be with him? Democrats are split on the answer, sources said. 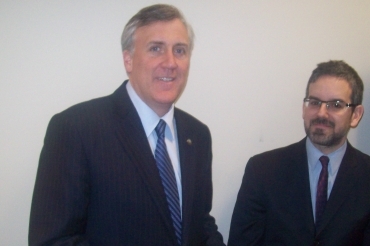