Union money has already begun to make its way into much anticipated 14th District senate race as Linda Greenstein, the Democratic assemblywoman from the district vying to move to the upper chamber, has raised nearly $14,000 from organized labor since the June 8 primary.

The teacher’s union is leading the drive with $8,200 in donations to the assemblywoman, who hopes to unseat Republican Tom Goodwin (R-Hamilton) in the November special election.  The teacher’s union has been at war with Republican Gov. Chris Christie over the governor’s cuts in state aid to schools and his campaign to have voters reject school budgets in districts where teachers did not agree to a pay freeze.

The Communication Workers of America Local 1036 is just behind with $5,000 in donations.  The CWA has opposed Christie’s austere budget form the start as the $8 billion in cuts will mean public employee layoffs.  The unions also opposed the pension and healthcare reforms passed in April.  Those bills were supported by both parties but were spearheaded by the newly elected governor.

The special election to fill the 14th District seat is widely seen as a referendum on Christie and will be a gauge the power of the unions in the state- employee-heavy district.  Greenstein has already signaled her allegiance to labor when she was flanked by several union leaders at her campaign kickoff annnouncement.

Goodwin can count on heavy union opposition throughout the race and will likley have a difficult time keeping up with Greenstein in fundraising.

The assemblywoman will begin the general election campaign with more than $120,000, while Goodwin begins with $34,000.

Goodwin took over the 14th District seat earlier this year after former Senator Bill Baroni was appointed deputy executive eirector of the Port Authority of New York and New Jersey.  Baroni had been a union favorite and traditionally won Hamilton, his hometown, by large margins.

Goodwin also has a base in Hamilton after serving as a councilman in the township for just over four years. 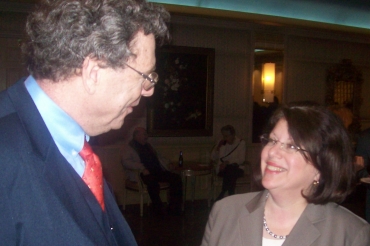