The allies of U.S. Rep. Leonard Lance (R-Lebanon) insist they don’t mind a once beaten foe surfacing at their town halls – this is America; but they don’t appreciate the fellow Republican badmouthing Lance in a neighboring congressional district at the side of a still-standing Tea Party candidate.

“She’s doing a great job, she’s a firecracker,” said Larsen of the Highlands mayor, the general election challenger to U.S. Rep. Frank Pallone (D-Long Branch) and the only New Jersey congressional challenger running with the full, anti-establishment backing of the Tea Party to win in the June Republican Primary.

Larsen continues to be less than thrilled with his own congressman, however; and didn’t mind sharing his feelings with his Monmouth County crowd.  Speaking to an assembly that included members of Anna’s Army, Larsen in plugging Little also publicly called into question the moderate Lance’s GOP credentials.

The remarks subsequently got BlackBerried back to Mitchell.

“This is not the way Republicans should be treating each other,” said Lance’s chief, who later saw Larsen among the audience members at a Lance town hall meeting at the Woodbridge Municipal Building as the congressman prepares to withstand the Democratic Party nominee, former teacher Ed Potosnak of North Plainfield.

It was the third or fourth occasion the Tewskbury businessman appeared at one of the congressman’s recess events, putting Lance’s people on alert each time. Of the three Tea Party candidates who ran against Lance in the primary, Larsen amassed the most votes (31%) in losing to the incumbent freshman congressman (56%), and was the least conciliatory after the contest, according to Mitchell, adopting an “I’ll be watching you” tone.

Larsen wouldn’t deny that he’s prepping for another run at Lance in 2012, but said he does not intend to make a formal announcement until after Nov. 2nd. Addressing his comments at a Smart Girls forum in Red Bank, Larsen admitted he may have said “Lance is not a real Republican.”

But “I don’t like the word ‘RINO’ (Republican in name only),” he told PolitickerNJ.com. “I don’t even use the word ‘fake.’ My point was if Leonard Lance was down south, past the Mason Dixon Line, he’d be known as a Democrat.”

Mitchell doesn’t appreciate what he sees as sour obstinacy.

“They’re only two teams on the field, and if you’re not with us, you’re with the other guy,” he said. “He put a quarter of a million dollars against us and got 31% of the primary vote. Now, let’s put our differences behind us.”

Mitchell was annoyed too that Little didn’t publicly reject Larsen’s remarks at the event, especially since Lance met personally with the anti-establishment Highlands mayor and cut her a campaign check for $2,000.

Leigh-Ann Bellew, spokeswoman for Little, said of the candidate, “She doesn’t approve of the comments. She’s a Republican and she supports Leonard Lance and believes the Republican Party needs to be unified.” 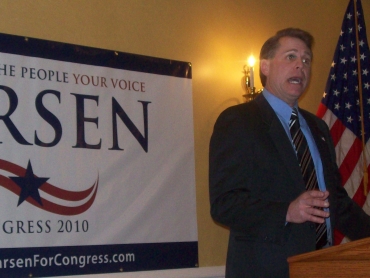