The face of former undersheriff Republican Felix Garcia smiles down on Paterson from Diego Rivera-sized billboards at two key downtown intersections in a play for Latino love as stunned Democrats struggle to pull together a countywide ticket.

Amid party paranoia, the overriding projected emotion is confidence; against a backdrop of disunity, the prevailing theme is unity at today’s unveiling ceremony in the administration building, where Passaic County Democratic Committee Chairman John Currie announces his choice of Clifton cop Richard Berdnik – a 28-year veteran of the department and FBI Academy special course grad – to run against Garcia for a seat vacated by Jerry Speziale.

Currie heads off the notion that no one will know the buttoned-down Bednik on Nov. 2nd, Election Day.

“In two weeks, he will have name recognition,” says the county chairman. “Possibly television  and radio. We’re going to spend $300,000 on the county race.”

He puts it out there that Speziale – who vacated his sheriff’s job two weeks and made a single, one-miniute phone call to Currie after the news went live – should donate some money to the party.

“Jerry should pay his share of the bills for the literature we had to throw away,” says Currie, acknowledging the former sheriff’s decision to pull his $1 million warchest out of the race.

“We’re in an emergency,” the chairman adds with reporters and cameras crowded around him. “I’m disappointed in Jerry. The manly thing to do was for him to sit down and tell me, ‘Listen I have a better opportunity here.’ I feel very, very betrayed. He’s given the members of his party no courtesy.”

An outsider to county law enforcement – and with headlines like those above that’s a selling point here, according to party insiders, and maybe a way to outflank Garcia, who spent his professional career at the county – Berdnik says with a nod to the newspaper, “I’d have to do an assessment of the department.

“I can say this,” he adds. “There will be zero tolerance for corruption. An assessment is needed when I get there.”

But politically Berdnik isn’t the story as much as the battling Currie.

“I’m convinced the chairman has done everything humanly possible to reach out to people,” says U.S. Rep. Bill Pascrell (D-Paterson), screaming into an acoustical vaccum on the first floor of a nine-story cone towering up to a glass skylight.

“The chairman has chosen wisely. Lt. Det. Berdnik is going to make a helluva sheriff. Take a look at his family,” the congressman adds.

Three of four children step forward next to a beaming Berdnik and the crowd erupts.

It’s a big crowd of party regulars – Freeholder Director Bruce James, Freeholders Grayson Hannigan and Terry Duffy – minus some faces that might have completely filled in the puzzle that still dogs the party heading toward the county committee meeting tomorrow.

Berdnik probably has the votes to land the nomination, but he will have to fight for it against former Paterson Police Chief Larry Spagnola on a secret ballot.

From a table in Mario’s Pizza in downtown Clifton, Spagnola bad-mouthes Currie today on his cellphone, and says he’s committed to answering the call of those county committee members who think he’s a better candidate than Berdnik. Sources say a county committee member intends to enter Paterson Council President Aslon Goow’s name into the mix, maybe sincerely, or maybe just to blunt Spagnola – who lives in the same second ward of Paterson as Goow – and help swing the tide convincingly to the chairman’s choice.

In any event, two thirds of the 36th Legislative District delegation attend the Berdnik fest in lieu of no one from the 35th showing up.

“Senator Girgenti had a previous commitment; he’ll have to answer for himself,” says Currie of the veteran legislator who made a play for sheriff before the chairman told him no.

With the challenge of Spagnola still looming out there and the threat of a split tomorrow night as the former Paterson chief makes a play for sheriff, Currie summons Mickey Bradley of Wayne, chief from Bergen County, who also wanted the job but who now steels himself well enough to play stoic party soldier.

With that, he’s done.

Apparently unscathed by the sheriff’s debacle – unlike Girgenti, who didn’t want it then wanted it; and Pou, who wanted Girgenti to have it so she could become a senator, according to sources – state Sen. Paul Sarlo (D-Wood-Ridge) and Assemblyman Gary Schaer (D-Passaic) both step forward to happily back up Currie and Berdnik.

“Law… enforcement… well-qualified… I’m confident we will prevail,” come the disjointed remarks of the senator, inaudible in the big open space of the administration building.

On the heels of Sarlo, Schaer shouts succinctly, “Now is the time for unity and the time for all of us to stand behind our chairman.”

Paterson Mayor Jeff Jones stands in the background, not objecting when Currie says he’s with Berdnik.

Standing amid applause when Pascrell introduces him as the next sheriff of Passaic, Berdnik says, “I’d like to thank everyone for taking time out of their busy schedules.

“And I want to offer special thanks to John Currie for bringing my nomination forward to the Passaic County Democratic Committee,” adds the Clifton cop.  “This ranks right up there with the proudest day of my life.” 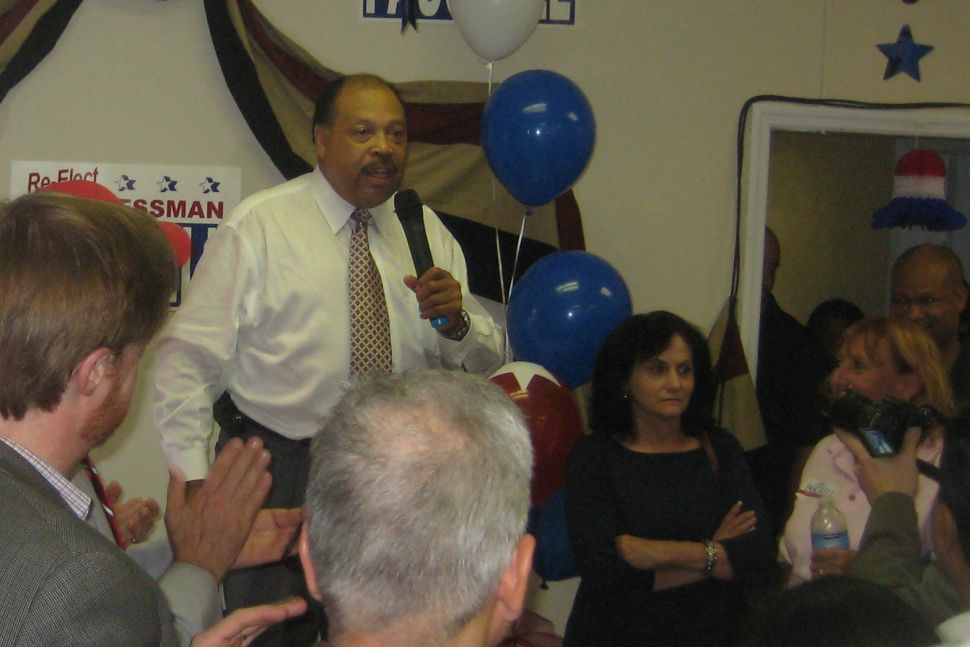