ATLANTIC CITY – At the Democrats’ gaming summit this morning, State Sen. Paul Sarlo (D-Wood-Ridge) made clear that an Atlantic City-centric approach to gaming is not what he thinks is in the best interest of  North Jersey, or the state in general, a point of view that inevitably clashed with the South Jersey leadership.

Sarlo grilled Mark Juliano, president of the N.J. Casino Association, as to why one Atlantic City casino owner has opened gaming tables in Pennsylvania. “Instead of investing in another state, why not just invest it in our state?” Sarlo asked. He cornered Juliano: “I just heard you say that you’re not afraid of competition and that its not effecting your business.” Juliano later changed his stance, “Yeah we’re afraid of competition.”

The audience, apparently heavy with Meadowlands backers, clapped a few times as Sarlo jousted with Juliano, only to be cut off by summit chairman, state Sen. Jim Whelan (D-Atlantic City).

“If we want to have a contest between the Meadowlands and Atlantic City, (we can do that),” Whelan interjected. “I’ll make one phone call and we’ll fill this room woth construction workers.” A few minutes later, as Sarlo began to wear on Juliano, Whelan threatened “300 construction workers” could be summoned with a call.

As Assemblyman Ralph Caputo was given the floor, he joked to Whelan, “You’re not going to make any phone calls, are you?”

After Juliano told Sarlo that the blight and crime issues pointed out by the Hanson Report were a “perception problem,” rather than an actual problem, Sweeney pressed him further. “The beaches are clean; it’s not bad,” Sweeney summarized Juliano’s view. “Then why would you agree with the report?” 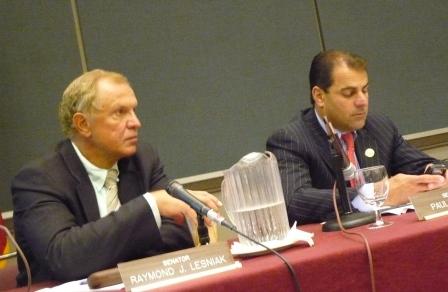