RIDGEFIELD – As the 8 o’clock close of polls approaches, neither side will make a prediction on the future of Mayor Anthony Suarez.

The feds say they have video footage of Suarez doing the dealing-at-a-diner dance, so a question among his critics is why he would put the town through this much political trauma if the proof is nearly inarguable? Bob Avery, father of the recall initiative, thinks he knows why.

“The question is, just what is the victory of the cat on a hot tin roof?” he said, referencing the well-known Tennessee Williams play. “The answer is, just staying on it a little longer, I guess. And that is Suarez’ victory.” One more minute in the sun.

Each side has banked absentee ballots, especially as this election falls smack in the middle of vacation season. The GOP has 250 in pocket, while the Dems carry only 100.

Dave McClelland, the mayor’s young taskmaster, “You can’t always be too sure with absentee ballots.” Each side will “cross examine” signatures, McClelland said, and he won’t venture a guess as to whether the machine votes will close with someone leading by more than the 350 absentees. “I’m not sure about that.”

Keeping the faith for Suarez outside the library all day was Jimmy Kontolios, a local resident.

“I believe there’s a good reason why he didn’t resign,” Kontolios said. “Because he’s innocent.”

But a contradiction seems to emerge, as Kontolios notes that he was a fervent supporter of Gov. Chris Christie. Kontolios has family in Morris County, and was present when the governor made his private announcement to run.

Is it a contradiction, backing the accused criminal and the arrest architect?

Kontolios, a registered Democrat, doesn’t think so. He has crossed party lines on many occasions.

“(Christie’s) job was to (catch) things like that,” he said, but “Anthony was taken advantage of by some unscrupulous people.”

Asked whether the mayor was at fault for entertaining these “unscrupulous people,” Kontolios said no. “I think they sought him out.” 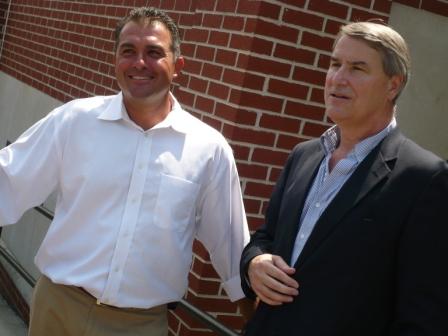