TRENTON – Gov. Chris Christie is back from vacation. Upon his return to the statehouse this morning, state Senate President Stephen Sweeney (D-West Deptford) told the governor, “You look great,” Christie said at a press conference.

“Bad news for you guys,” the governor shot back.

Obviously a little R&R hasn’t taken the gangbuster out of Christie. His State Street bully pulpit assault isn’t affected by exposure to the sun.

First on the agenda was a lay-up. He stood next to an advocate for the intellectually disabled and signed into law a bipartisan bill to remove the words “retarded” and “retardation” from state laws and regulations. Other terms like “feeble-minded” will also be switched out, Commissioner of Human Services Jennifer Valez said.

Christie said it was just a matter of a Microsoft Word-like “search and replace” substituting the “R word” with more respectful language.

Christie called the bill overdue. “You wonder how it took so long for it to happen.” He said the issue of the “R word” picked up steam with controversial usage in the comedy Tropic Thunder and locally with a recent rally of advocacy groups at Rutgers University.

Sweeney publicly welcomed back the governor, too. “I didn’t do too much damage while you were gone.”

Christie then took random questions from the press.

How about that Delaware River Port Authority; anything illegal going on?

“One of the things I miss most about (being U.S. Attorney) is that I don’t have subpoena power.”

What about news that Cigarette Tax Revenue Bonds were downgraded?

“That money should have been spent on health care.”

And the mosque at Ground Zero?

“We can’t paint all of Islam with a Mohamed Atta-brush.” (He also said President Barack Obama gave it “political football” treatment).

Governor, have you reconsidered any recommendations of the Hanson Report? No.

O-kay, what about state Sen. Ray Lesniak’s push for gaming in the north?

“If he can get slots at the Meadowlands, let him do it.”

Oh, oh, are you going to the Giants-Jets game tonight? New stadium, huh?

“I unfortunately will not be at the game this evening. I will be at the Jonas Brothers concert.”

Next question… wait, what?

His six-night, six-stadium baseball tour with his boys at the tail end of his two-week vacation had a cost, he said: a night out with his girls on the Jonas’ Lines, Vines and Trying Times tour. Trying times, indeed. 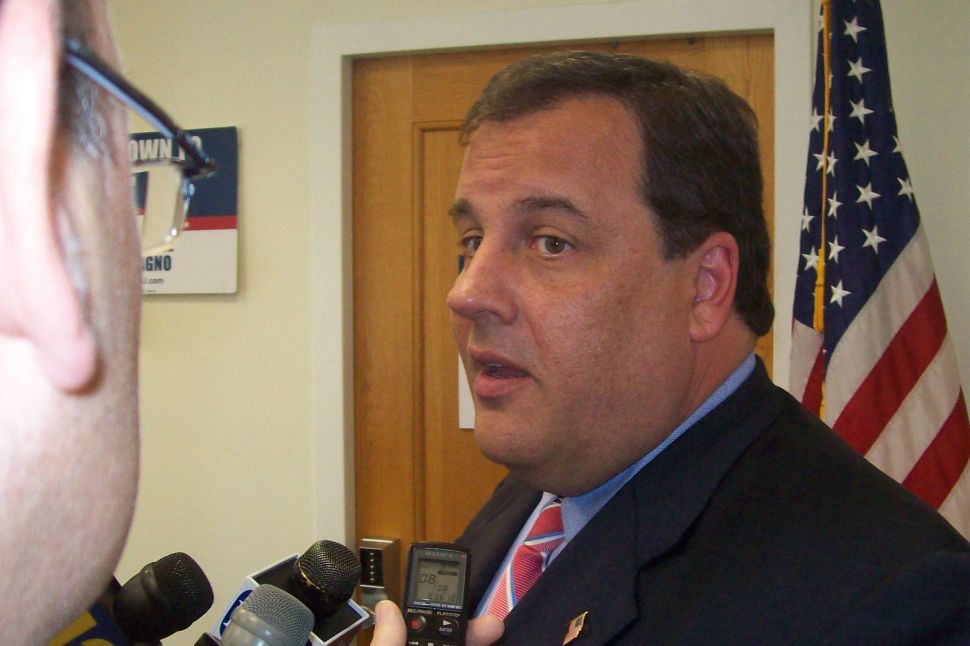